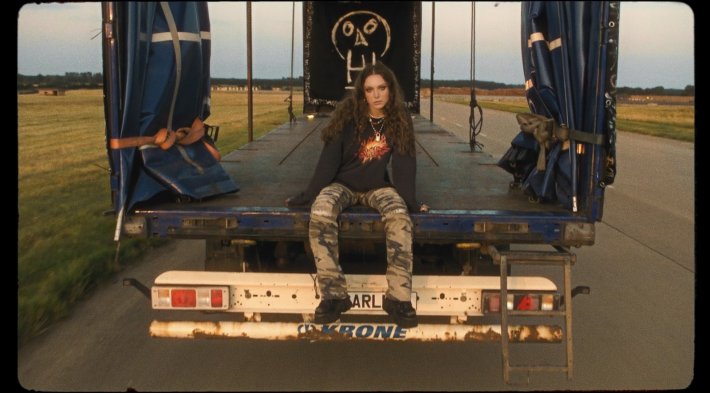 With her highly-anticipated new EP set to drop in the coming months, Holly Humberstone has now unveiled the next cut to be lifted from her forthcoming release.

The new single 'Scarlett' comes accompanied by a brilliant new video, and follows on from the previously shared tracks 'Haunted House', 'Please Don't Leave Just Yet' and the collection's title-track in previewing her sophomore EP 'The Walls Are Way Too Thin', which is out on the 5th November via Polydor/Darkroom/Interscope.

Speaking about the new offering, she said, “This track is my absolute favourite. “It’s a fuck you to the guy that was going out with my closest friend Scarlett and it was written as they were breaking up. The relationship was totally one sided and lasted for years. Scarlett was all in and had pretty much planned their future and it was pretty clear to me that he was stringing her along, until he broke up with her in a really insensitive and heartless way. I was her closest confidant and so I knew everything she was feeling, and I’d see how passive he was with her at parties first hand. She vented to me for probably about a year and so I went through all the stages of a break up with her and watched as she slowly realised her worth and that he wasn’t worth her tears anymore. I wanted to write this one from her point of view. It’s a pretty positive song as it’s about her finally letting go, realising his many faults and taking back her life.

“Sonically and lyrically, Scarlett breaks away from the rest of the EP and in so many ways it feels like such a release. It was really important to me that the music video felt really empowering and a reminder that you can shake off anything rubbish going on in your life and be in control of your own destiny. Obviously the song is about Scarlett so she had to be in the video - especially after being named an ‘emotional grim reaper’ lol. The two of us break into an airport hanger, steal and spray paint an arctic truck, then I perform on the back of it as Scar drives it down the runway. It was honestly the most fun.”

Check out the new video for 'Scarlett' in the player below.

Following on from the enormous praise for her 2019 self-titled debut album, SASAMI is back to announce the details behind her next studio album,... 2 hours 57 min ago

Having returned with a flurry of fresh and exciting cuts throughout the year so far, Sad Boys Club have now announced their plans for a new EP,... 8 hours 40 min ago

2 hours 57 min ago Following on from the enormous praise for her 2019 self-titled debut album, SASAMI is back to ann