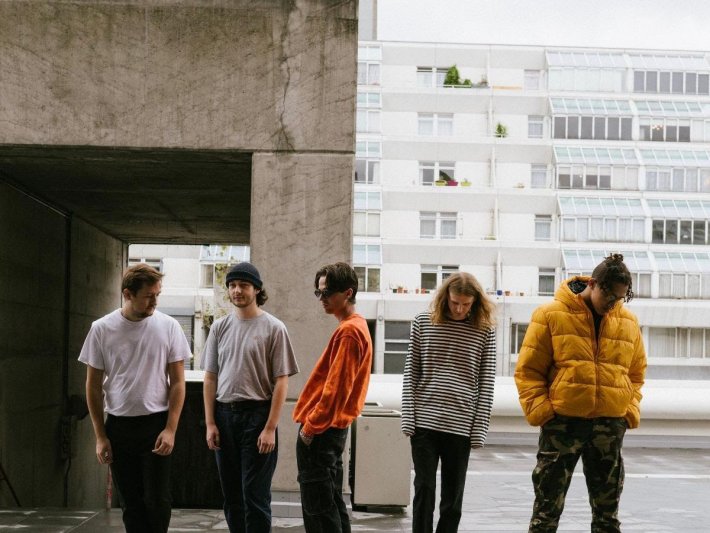 Following on from a jam-packed year, which saw them perform a highlight set at The Great Escape this summer, Aylesbury-based five-piece Birthday Card have quickly become a huge talking point on the new music circuit these last few months. And with their recent signing to Notting Hill Arts Club Recordings for their latest single 'Shy Away', the band are looking to head into 2020 with yet even more buzz surrounding them.

So with their name firmly on the rise, we sat down with frontman Josh Saw to discuss their plans, ambitions, and favourite moments from the last year.

Hi Josh, how are you today?

For those that aren’t familiar with your music yet, how would you best describe your sound? Who has influenced you the most over the years?

I suppose it would be art pop really. However, our overall sound is pretty schizophrenic. The five of us all have fairly diverse tastes in music. We try to take inspiration from everything we listen to and use that to create something that appeals to us collectively and hopefully others by instilling our songs with a pop-sensibility. Artists like The Streets, Blur and James Blakehave influenced us in some way sonically from the start. More recently we’ve been listening to a lot of Octavian, early noughties R&B groups and garage music.

You have just released your new single ‘Shy Away’. Can you tell us more about the inspiration behind that release?

With ‘Shy Away’ we wanted to craft a modern-day guitar driven pop song. The song came about through a jam, which at the time wasn’t our natural way of writing as we mainly produced beats and sounds in Logic and worked out how to replicate them live later. I’d had the lyrics and melody for some time and was really just waiting for the right piece of music to lay them on top of. As soon as we started fleshing the song out it became obvious to me this was it.

It is also coming out through Notting Hill Arts Club Recordings, the new label from the legendary London venue. How did they come to approach you for the track?

By chance. We were sound-checking ready to play the club and Ewan Grant, one of the main figures who heads up NHAC Recordings overheard us messing about with an Orange Juice song. It must have caught his attention because he hung about to watch us play. We didn’t know this at the time but luckily for us it was one of the best shows we’ve played to date. He approached us after the show and the rest is history.

It has also been an incredible year for you, including a major set at The Great Escape this summer. What would you say have been the highlights so far this year?

As you’ve mentioned, The Great Escape was definitely a highlight for us. We were on pretty early and none of us knew what to expect in terms of turn out but the room was packed. At the time ASOS were kind enough to feature us as one of their ‘4 Stylish Acts at The Great Escape’. As well as TGE another highlight for us was working with producer Mike Spencer on Shy Away who has previously worked with the likes of Jamiroquai, Kylie Minogue and Tom Walker.

And what about the year ahead? What do you want to achieve in 2020?

We just want to keep releasing more music, and play more shows to more people. We’ll see where that takes us.

And finally, given that Christmas and New Year is just around the corner, how are you planning to cap off this year?

To celebrate the release of Shy Away we’re playing a show at NHAC on 19th December. It’s free entry and there's a great line-up, so make sure you come down!

Birthday Card's new single 'Shy Away' is available to stream and download now via Notting Hill Arts Club Recordings. Have a listen to it in the player below.

2 days 30 min ago With her long-awaited new album landing next week, Rae Morris has now unveiled the final cut to b

2 days 24 min ago After receiving a flurry pf praise and attention from the likes of The Line Of Best Fit, Euphoria