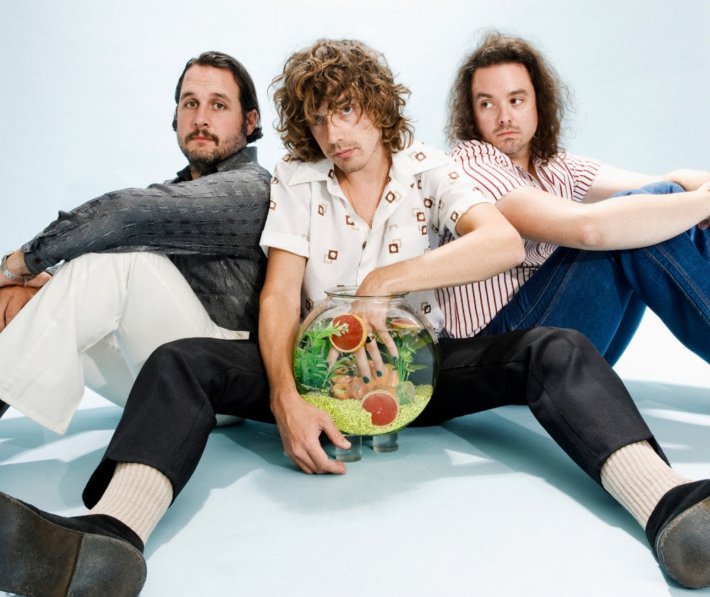 For the last fifteen years, Toronto-based trio Born Ruffians have been one of the country's most prized exports. With a wave of bright and blissful indie-rock cuts emerging from the group like an unstoppable traction engine, the band are now ready to return with their sixth studio album 'JUICE', a record that shows things really do get better with age.

So with their presence about to be know throughout the world once again, we sat down with the band to find out more about their latest material and how they plan to celebrate this new and eventful milestone.

You are just about to release your sixth album ‘JUICE’ and it coincides with your 15th anniversary as a band. How do you feel this record sounds compared to when you first began?

I'm not sure we've changed that drastically to be honest. We still enjoy making music together that feels a certain way. I'm never sure how to describe what that way is, but it's the way we sound. I recently was forced to listen to a mix of our songs on shuffle - it was at a restaurant in my home town and I felt rude asking them to turn it off. I realized as the songs played through how consistent the overall sound of our band actually is - I think.

There seems to be a trend within these songs, all looking back on the past, especially on your latest ‘Wavy Haze’. Are you beginning to feel more nostalgic these days?

No not exactly. Wavy Haze would be the most reflective song on the album. I must have been thinking back to the old times the day I wrote it. I've been keeping a journal for the past five years or so where I try and jot down, in list form, everything I did that day. I just checked and it looks like I wrote Wavy Haze almost exactly three years ago, and I knew that day it was a good song. I like being able to connect specific songs with specific memories, experiences, emotions. That song has a direct connection to being nineteen/twenty years old and mostly miserable. But I look back through this wavy haze of memory very fondly at that period in my life.

And after fifteen years together, do you feel more assured in yourselves and the sound you are looking to create?

Yes and no. I want to change things now more than ever. I think this year marks a real conclusion, in a way, to a four year time period of writing and recording that started with Uncle, Duke & the Chief. I think comfort zones can be a bad thing. David Bowie said "Go a little bit out of your depth, and when you don't feel like your feet are quite touching the bottom, you're just about in the right place to do something exciting."

You’ll also be heading off on a North American and European tour very soon as well. How do you find the touring life?

Touring is fun. It used to feel like an adventure, like anything could happen. We've been doing it long enough now that there aren't any major surprises, but there are still little ones. I look forward to those a lot. We know more or less every place we're going to play and how it's going to go (emphasis on more or less). The great thing about touring is it's truly a hedonistic life style. It's the closest thing I can imagine to a modern day hunter-gatherer life style. Every day is a myopic experience. You're aiming to get to the next city and play the show, find some good food etc.. It's all delightfully simple.

And are there any shows that you are particularly looking forward to?

I'm looking forward to those little surprises I don't even know about yet.

It is obviously going to be a busy year for you regardless, but are you planning to embark on anything else before the end of 2020?

Yes. I can't say anything yet or I'll get in trouble from Noah our manager, he'll put me in a big bear hug and Squeeze [sic] me until I pass out. But... yes.

And finally, given it is your fifteenth birthday as a band, are you going to be planning anything special to celebrate?

It may actually be more like our sixteenth or seventeenth year as a band, I'm not even sure to be honest. We started the band in high school together and my memory is a bit of a wavy haze ;). We have let several anniversaries come and go with little to no fanfare (our first album turned ten in 2018), so I think we'll just keep on trucking. We're not too sentimental, no.

Born Ruffians will release their new studio album 'JUICE' on the 3rd April via Yep Roc Records. Have a listen to their latest single 'Wavy Haze' in the player below.

9 hours 30 min ago With their eagerly-awaited new album landing in just a few days, Yard Act have now unveiled yet a

9 hours 43 min ago Following on from a string of enticing folk-inspired offerings over the last year, Bristol-based