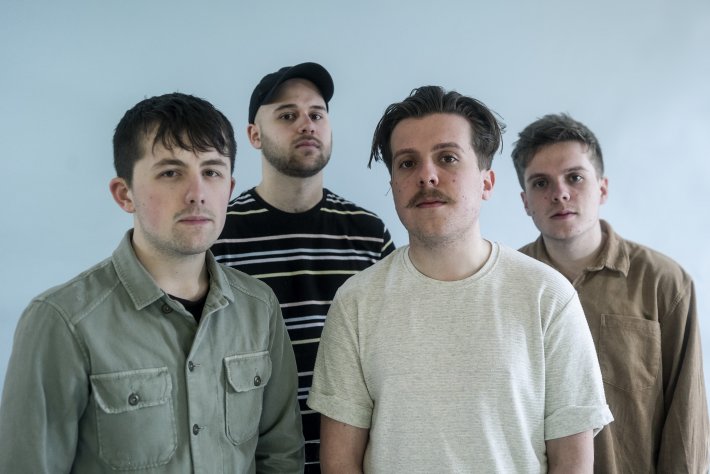 Having spent the first few years of their career self-releasing new material, indie-rock four-piece China Bears have now found a home on the illustrious Fierce Panda records as they unveil their latest single 'Stay For Good'. But with so much buzz already surrounding the group, we decided to sit down with them to discuss their latest work, what this year has in store for them, and what they most want to achieve in the band.

You were originally formed with twin brothers Ivan (guitar/vocals) and Frazer (guitar). Growing up, was it always your dream to form a band together?

For all of us individually music has been a big part of our childhood and teenage years. Dean played a lot in the church he grew up in Northern Ireland, James’ family are always singing and playing music and Ivan and I really got into playing music whilst at secondary school by playing in bands. Playing and writing music has always been something we’ve all wanted to do.

And how is it working with another member of the family? Is it civil or can you behave like the Gallagher brothers sometimes?

Ivan and I usually agree on most things, but when we don’t things can get pretty heated. I feel sorry for the other two sometimes when they get caught in the cross fire! But we’re all so close now that we never sleep on an unsettled dispute.

You met your bassist James and drummer Dean at university. Did it take a while before you realised they were perfect to be in a band with or did things just fall into place organically?

Everything happened quite fast really. We met in September and then had our first gig in December! I suppose it fell into place organically, but they were a perfect match for us as they shaped the sound and style of the musical ideas that Ivan or I had previously written into a completely new way.

Many have compared your sound to that of The National and The Maccabees, but with a touch of Death Cab For Cutie style inspiration. So can you tell who have been the biggest influences behind your sound?

Bands such as Dry The River, The National, Frightened Rabbit, Coldplay, Snow Patrol, Kings of Leon and The Maccabbees have all been massive influences for us since teenagers. We just love music that moves us and lyrically is saying something.

You have just released your debut single through Fierce Panda Records called ‘Stay For Good’. Can you tell us about the background behind that release? What was the inspiration behind it?

That’s a song about distance, loss and expecting more from yourself. It’s about trying to make something work even though there’s no sustainability or longevity to it.

Your new EP is also set to arrive later this summer. What would you say best describes the sound and intention you are going for with this new release?

The soundscape and writing is a lot more mature, we pushed ourselves extremely hard to make them the best we could. Dan Young was great at engineering the EP and helping us get the sounds we wanted out of our instruments’. The EP documents our life over the past four years from being teenagers and moving away from home and ascending into early adulthood with all the trials and tribulations that come with that.

You have already confirmed yourself for a number of gigs later this year, but are there any that you are particularly looking forward to?

We’re especially looking forward to playing at The Great Escape in May!

And finally, what plans or goals have you set yourself to achieve over the coming years? Any bucket list ambitions you’ve set yourselves?

We want to just keep writing and playing as much as we possibly can. We love playing live and meeting new people so to be able to just to keep doing that and reaching and connecting with wider audiences in different areas of the world would be amazing. Also growing up in Somerset, Glastonbury has always been a close festival to Ivan and I so playing there would be a dream!

China Bear's new single 'Stay For Good' is available to stream and download via Fierce Panda Records now, and you can check it out in the player below. The band are also set to perform at The Great Escape and Soma Fest later this year.