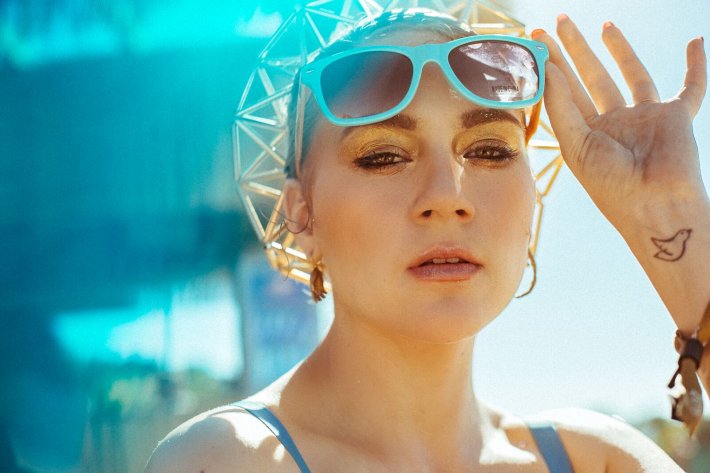 Having started out as a dancer on Broadway, fast-rising newcomer Kat Cunning is certainly no stranger to the theatrical. And after a few months of huge buzz around her, she returns with her sultry new single 'Stay On The Line'. So we decided to sit down with her to discuss her past inspirations, what she hopes to say in her music, and where this new adventure looks to take her.

Hi Kat, how are you today?

I had a rehearsal, a swim, and an egg sandwich today, so I’m doing great. I'm a simple man.

For those that aren’t familiar with your work yet, how would you best describe your sound?

I always trip on this question and undersell myself. I think it’s because I’m not trying to make a particular genre of music. I’m just working my shit out through song and I’m lucky people want to hear it. But if I had to say, I try to keep the vocal dry like Fiona, keep the story real like Nina, keep the stakes high like Florence and keep em movin like Madonna.

But you haven’t always been a musician. You have also spent some time as a dancer on Broadway. Would you say that your music reflects the theatrical elements of your dance career?

Absolutely. I always write with visuals and live production in mind. After years of dancing and auditioning to be in other people’s projects, not quite fitting their aesthetic, I wanted to make my own songs like little operas or ballets that feature the dancers and collaborators I think are fucking unique and authentic and the stories of my queer community that deserve to be told.

You have just released your latest single ‘Stay On The Line’ and it seems the highlight a very important message. Can you tell us about how you came to write that song?

It was one of those songs that just happens to you. It was my last session in a month of writing and not something I intended to write about. But the chords my co-writer played just put me in a “Goodnight Moon” type bedroom and it had the mixture of a lullaby and something funky sneaking up on you. The whole lyric fell out of me and I was like- “well! I wrote a phone sex song.” It makes me laugh every time. I feel lucky to have landed on something so many people have experienced that I haven’t heard a lot of songs about. Talking about sex and highlighting it for the way it can be fun and exciting and beautiful and life changing is important to me. Love is cool. Sex is a part of that. Shame is a form of oppression.

And would you say the sound of your new single is inspired by anyone in particular or are you trying to create your own path with your music?

I’ll never forget when my friend Gabriel Garzon Montano sat me in front of his studio grade speakers in his dorm to hear “Red Coat” by James Blake. He pointed to the sound when it panned. He illuminated all the little secrets that are hidden in James’ production. I love this track for the artful collaboration between Maths Time Joy who captured what I loved about Blake, and Nikolai Pothoff who brought an entirely surprising urgency and newness to it. I feel like it’s full of shocks and waves to carry you through, all the while supporting my lyric.

It has already been a fast rise for you since you started releasing music last year,but what would you say has been the highlights of your time as a musician?

There’s no where I feel more at home than in a theatre. I think it was opening for LP in Montreal that I got my first real taste of how it will feel to play stadiums. The rush of people I had never met, who had never heard of me, who were moved by the work and by what I stand for… that’s something I keep in my back pocket for rainy days.

And what about the near future? Are you currently working on any big projects that you can discuss at this time?

There’s another UK tour in the works, a new video and I will be making my TV debut as a recurring role in The Deuce on HBO alongside James Franco and Maggie Gyllenhaal. Stay in touch on insta for updates @katcunning

And finally, while we are just past the midway point in the year, do you have any goals you would like to achieve before the year ends?

Collaborate with Creepy Yeha and Wildfang on the next look? Collab with King Princess? 'Stay On The Line' dance video? When’s the Super Bowl? I wanna do that.

'Stay On The Line' is available to download and stream now. Have a listen to it in the player below.

13 hours 43 min ago With her eagerly-awaited new album landing in the coming months, Billie Marten has now unveiled t