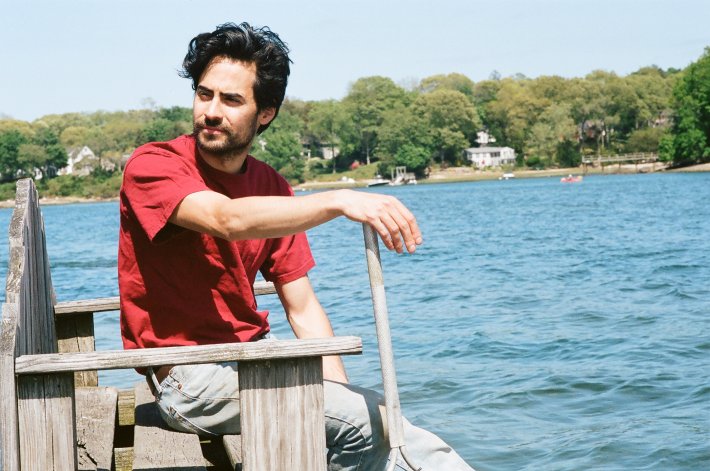 Despite originally emerging in 2018 with a breadth of bold and captivating indie-rock ideas, New York-based self-taught multi-instrumentalist and filmmaker Alex Cherney aka Rey has now just released his highly-anticipated debut album 'The Thing About Everywhere'.

All written, performed and produced from Cherney’s home library turned studio, 'The Thing About Everywhere' looks to cement the frontman as a bright and growing talent on the new music circuit. Filled with sweeping compositions, breezy ambitions, and his own calming vocals at the helm, this new full-length looks to bring a smile to the face of anyone who hears it.

So with his new record finally with us, we sat him down to discuss all things past, present, and future.

Hi Rey, how are you today?

Feeling great! I’ve been building a tiny house for the last year and am finally on the home stretch with it. Today, I’m building the kitchen counter (butcher block countertop ftw!). Other than that, doing some video editing work and enjoying this sunny day on Long Island, NY.

I think I’d best described it as Jack Johnson meets The Beatles. Folk-rock with surf tones. It has a nostalgic quality and my biggest influences are late 60s / 70s giants like Neil Young, Joni Mitchell, & Bob Dylan. I listen to Bob Marley pretty much every day, so can’t leave him out! Modern indie too — the bands Whitney & The War on Drugs were a big influence.

Can you tell us how your new single ‘Open’ came about?

I developed a friendship with someone from my hometown (we were never close growing up, but became so post-college). Slowly, feelings that possibly we were more than friends crept in. My ex-girlfriend was a mutual friend of ours, and a few other personal issues stood in the way, so we never crossed that line. The song explores a potential love that will never be, and captures it in the phase where it still seems attainable.

The writing process was a bit more sporadic — humming the melody into my phone memos when inspiration struck... developing that melody into the lyrics... and finally building out an acoustic demo track.

I had been working on developing my sound for Rey already, I think this was the 3rd song specifically made for the project. So I had an idea of the arrangement & tones when putting my demo together. Although the song has a very ‘major key’ upbeat tonality, the lyrics delve into a much more emotional realm -- a theme repeated throughout the album.

You just released your debut album ‘The Thing About Everywhere’. Can you tell us what the album means to you?

I tend to write music in a variety of genres. I love exploring different sounds but felt it was time to start honing in on one that best represented me as a person. The first tracks I wrote were The Wind in Our Eyes, Augustine and Open, which defined the sound and theme of the album. ‘The Thing About Everywhere’ is about developing an appreciation for the little things in nature and life. Everywhere you turn can have what you’re looking for if you approach it with an open mind. These songs tie my personal experiences living on Long Island into that theme!

It’s been a truly difficult time for everyone. I feel fortunate to have remained healthy and working. The rest of my year consists of sharing my music & performing digitally, and moving with my tiny house (it’s on wheels!). I managed to build a tiny studio in it, and once I’m settled I’ll record some live sessions and new music from it!

And finally, what is your dream ambition to achieve as an artist?

I would love to open up an art experience park (like Disney) where different artists across all mediums can have their own experiences for the public, to share their point of view in a hands-on manner!

Rey's debut album 'The Thing About Everywhere' is available to stream and download now. Have a listen to it in the player along with the new stripped back video of opening track 'Snakes & Lizards' below.

Rey · The Thing About Everywhere

10 hours 47 min ago With their eagerly-awaited new album landing in just a few days, Yard Act have now unveiled yet a

11 hours 57 sec ago Following on from a string of enticing folk-inspired offerings over the last year, Bristol-based