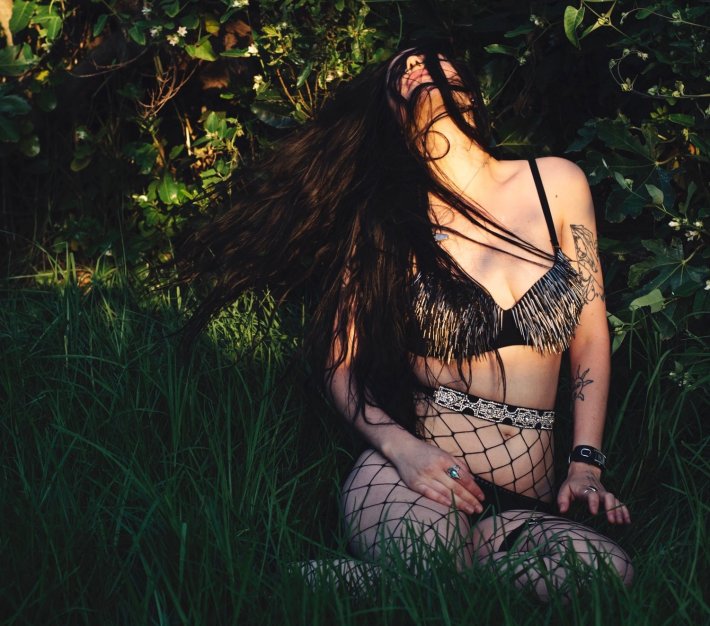 Having spent the best part of a decade working on her music, Melbourne-based singer, songwriter and producer skybelly is now ready to introduce herself to the world as she shares her brilliant new single 'the drama of a lava lamp'.

Lifted from her forthcoming new EP of the same name, which is out later this year, 'the drama of a lava lamp' makes for an incredibly dense introduction to her work. With its brooding dark-pop aesthetic and her own spiritual voice layered throughout, we can't wait to hear what she comes out with next.

So with the new single available now, we sat down with her to find out more about her new and upcoming material and what she has planned for the future.

Can you give us a breakdown of the EP?

There are 5 songs. It starts off with the drama of a lava lamp, which is dark and sexy and moody then moves into forbidden fruit which is a song for fucking, then we have white tails, which is quite emotional. The fourth track, the rhino, the tiger, & the emerald dragonfly, is an upbeat track that addresses climate change and the toll that it’s taking on younger people. Lastly is state of disaster, which is a warm, sweet confection that’s all about love and music.

What’s your favourite song on the EP?

I think my favourite is probably white tails. It’s the darkest, with these intense tempo changes and cloudy, unfolding synths… you really get the sense of going on a journey, but one that’s like the way you travel in dreams, where one moment you’re in one place and then you look up and you’re in a new place, but it’s changed dramatically from how you last remembered it, and yet it makes sense, as unreal as it all is. It’s a song about love, death, and my night terrors, where I wake up paralysed and massive spiders are crawling across the ceiling. Sometimes hooded figures watch me from the corner of the room. And the only way to break this hallucination is to stare directly at them - when you look at them deeply, they vanish.

Where did the name skybelly come from?

It’s the world before the fall. Before Eve ate the apple and the world was split into the pairs of opposites. It’s the notion of duality. For me, the sky signifies freedom, limitlessness, air, a sense of grandness, the universe - and the belly is where I am self-conscious, grounded, small, human. I wanted a word that would eclipse our human notion of duality, one that would encompass the spectrum - all that falls within and without.

Why do you make music?

I would like to touch people, in their souls. I’d like to connect with people. I think it’s also a means of escape - it’s a way for me to create a new world and vanish out of this one. There are lots of portraits of reality and sometimes I don’t want to live in the one that’s prescribed by politicians and priests and big oil and the media. I like to imagine ways to make life a bit more fun, a bit more kind, a bit more meaningful. I like to go deep. But when I think about my desire to make music, I do wonder where that desire came from. Yes, I choose to be singer - but I didn’t choose to want to be a singer. The desire chose me! I tried very hard not to want to be a singer, but I couldn’t make that desire go away. So I’m honouring it.

I’m loving Euphoria4ever by cONTRA! And I love the little Melbourne outfit Slypon. Everything Debby Friday does is incredible and Moondog is always good for a re-visit. Also really obsessed with the soundtrack to the 1977 film Suspiria by Goblin.

I get up every morning and write for 30 mins: stream-of-consciousness journaling that just helps to clear my head. Then I’ll make a pot of coffee and sit at my desk, light some incense and candles. Say a pray of thanks to the gods. Depends what I’m working on - sometimes it’s writing, sometimes it’s production - but I usually go for at least two hours, four on a good day. I keep my phone off until I’ve done all the work. And then I’ll rehearse in the evenings.

I also keep a notebook on me at all times to jot ideas and poems in. If I’m having fun singing a melody I’ll record it as a voice memo. I actually love voice memos, I like to record strange sounds while I’m out and about and use them as samples in the songs.

What’s important to you, besides music?

Love and the earth. I’m a hopeless romantic who’s passionate about climate change action. I think the current inaction on climate change is linked to classism, racism, sexism, a lack of education and a deterioration of values. Society values profit over the planet - over people. We don’t hold anything sacred anymore. I think we need to realign with our spirituality - and not in the typical religious sense, but in a way that connects us to nature and to our communities. We need to turn inward. Get to know ourselves better as individuals. Turn away from the screen, dear people… We need a new narrative, a new myth. I think the world has been wounded by colonialism and we, as a species, need to heal from it. We can’t keep repressing our pain. This also means amplifying indigenous voices and redistributing power over the land back into their hands, particularly in Australia.

What are your goals? Plans for the next 12 months?

This year I have 5 goals: release my EP the drama of a lava lamp, release my debut album a space tramp odyssey, finish writing my novel, record my next album and perform live shows regularly again.

Where do you see yourself in 5 years?

Touring the world with my beautiful band and then coming home to record in my home studio in the rainforest. I will have a black greyhound called Rocko and a black cat named Vali. And maybe some horses too. I’d also like to be in love.

Have you fallen in love before?

I think there are many different types of love. Romantic love is certainly delicious, but so is friendship, spirituality (love of the self, love of the god/goddess/universe), love of the natural world, animals, educators, collaborators, family. Love lives in us, in stillness and in action, eternally.

skybelly's new single 'the drama of a lava lamp' is available to stream now. Check it out in the player below.

skybelly · the drama of a lava lamp

3 hours 59 min ago With their highly-anticipated new album set to land in the coming months, Paramore have now unvei