INTERVIEW: Swimming Tapes discuss life on the road, bucket lists, and the response for their debut album

INTERVIEW: Swimming Tapes discuss life on the road, bucket lists, and the response for their debut album

The band will be performing at Sŵn Festival later this year 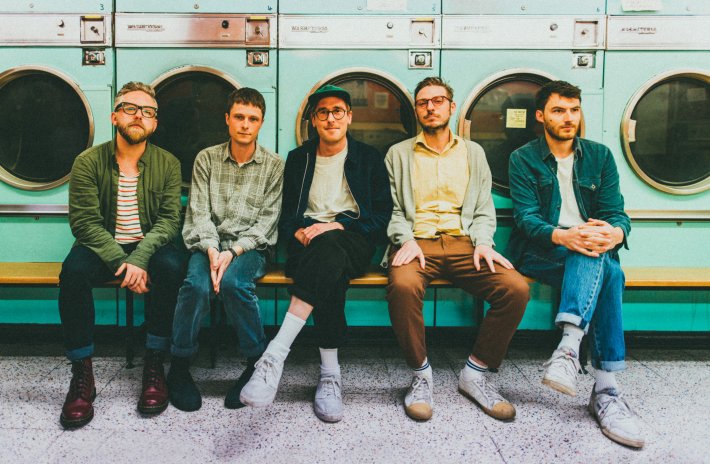 Since the release of their debut album 'Morningside' back in May, Swimming Tapes have found themselves riding a wave of acclaim and praise in the last few months. The band's distinctive indie tone has struck a chord with critics and music lovers alike, and big things still remain on the horizon for the London-based five-piece. So with that in mind, we decided to sit down with the band's drummer Andrew Evans to discuss their sound, what they have planned for the future, and what they are looking to achieve by the end of the year.

We are good thank you. The sun has finally started to shine in London this summer, so the last few weeks we’ve been much happier.

You released your debut album ‘Morningside’ back in May, have you been happy with the response from your fans so far?

The response has been really great, yeah. It felt very different releasing an album compared with an EP. It was really nice waking up on the morning of release knowing that people would be listening to 8 or 9 Swimming Tapes songs they’d never heard before. It’s always amazing to have people tag you in their photos of your record sitting in their collection, or them playing it through on Spotify. We were tagged in a post where two friends had stayed up til midnight and Facetime’d each other and listened to it together cos they both are into it. We’ve had people from all over the world get in touch. That stuff is lovely to see.

And how long were you working on that first full-length?

It’s quite hard to really know as there are a small handful of songs, maybe two or three that in some format or other we’ve had since we first started writing songs together. We either didn’t have them finished in time or didn’t think they would fit on the two EPs. So when we made a decision after the 2nd  EP that the next thing we were gonna do was an album we worked out which old ones we wanted to continue with, and that left us with 7 or 8 songs to write from scratch. It’s really hard to put a start and end point, but the bulk of the record – the 7 or 8 new ideas - was written in a period of about 5 or 6 months.

You also recorded it using a bunch of vintage equipment, mostly from the 1970s. Was that so you could create a more retro sound on the record?

I’m not sure it was for it to deliberately sound retro. One word that kept coming up when recording and mixing the album was “timeless” – in terms of something to shoot for. Most of our favourite records have that quality. We didn’t want to use too much of anything, be that equipment or production stuff, that would tie it to any one period in time. There are some records you listen back to and instantly, even in the way its mixed or produced, you can say “oh god it sounds so 90s doesn’t it”, or whatever it might be. We tried to keep it pretty neutral.

You have also got a busy couple of months at the end of this year. A quick stop at Cardiff’s Sŵn Festival before heading off on a UK tour. Are there any shows you are looking forward to in particular?

The Cardiff one! We have never played in Wales before and unfortunately we couldn’t get a date to work on the tour either, so we are really looking forward to playing at Sŵn.

And how do you feel about touring? Do you find it enjoyable or are there parts you could do without?

Touring definitely has its ups and its downs. More ups, for sure. Obviously, its great to be able to go and play your songs to a bunch of people in a city the other side of the country and meet the actual people who are buying your stuff. That is incredibly rewarding. But it can be tough too. Especially for a small indie band like us. To make it work you have to penny pinch a lot - so it's not exactly the most glamorous of times. haha! Touring is always fun, but its also A LOT of service station sandwiches for lunch and dinner, and sleeping in cheap, damp air BnBs.

But aside from the touring, do you have any other plans to get back into the studio at any point later this year?

We do, we’ve got a few ideas brewing at the moment. We hope to get some new music out there before the year is out.

And finally, now as everything is kicking off for you, what plans have you added to your bucket list of things you would like to achieve as a band?

I think our bucket list is very short! Haha. Swimming Tapes started with a bunch of friends just writing songs in a bedroom, and that’s still how it is. There was no master plan or milestones we were expecting to tick off. Now that the album is out there it would really special for us to go and play some shows outside of the UK. We have a lot of people in the US and Japan especially messaging us every day asking if we are coming out there. We are trying to make it work. I would add getting to make a second album to the bucket list. I think that’s all you can do really, hope that the record you’ve just made does OK and gives you the opportunity to make another one.

Swimming Tapes will join the likes of Gruff Rhys, Self Esteem and many more when they head to Sŵn Festival in Cardiff from the 18-20th October. Tickets are available here. Their debut album 'Morningside' is available to stream and download now, and you can check out the video for their single 'Easy Strand' in the player below.

21 hours 28 min ago With their eagerly-awaited new album now just over a month away, Death Cab For Cutie have now dro