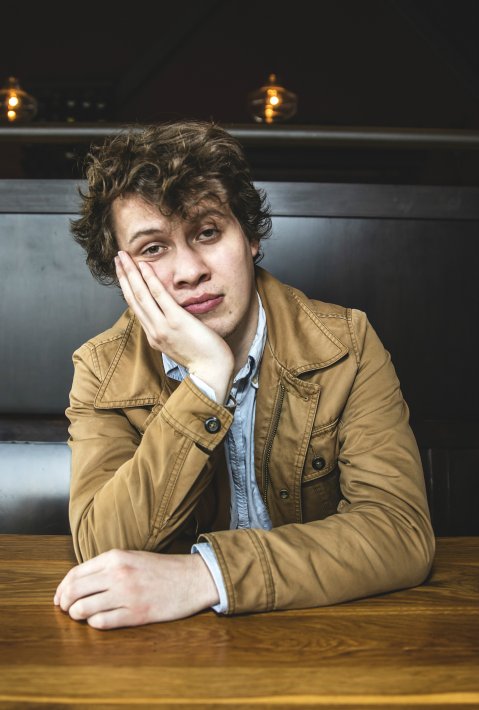 Taking comparisons to musicians like the great Tom Waits isn’t ever going to give a young artist an easy time. At 22, Trevor Sensor, who’s signed to Indiana-based label Jagjaguwar, has had that thrust at him and it isn’t difficult to see why. His vocal delivery, achingly honest lyricism and literary influences combine to create a refreshingly compelling guy who’s obsessively dedicated to what he does.

From playing in bands in his Illinois hometown through to the recent launch of his latest solo EP, Starved Nights of Saturday Stars, Sensor has been adamant that irony isn’t going to be taking a prominent role in his work. Rather, his writing focuses on truth, vulnerability and sincerity.

Take the opening line from Sensor’s latest single, ‘When Tammy Spoke To Martha’, which has him growl, ‘I get in trouble every time I go to the bar/ Getting drunk on the stars’. The self-deprecating delivery coupled with the romanticism show a nod to the kind of guy he is and what you can expect from him going forward.

We caught up with him on a day off to find out what makes him tick.

Trevor Sensor: It’s fine. I got to sleep in finally today which I haven’t been able to do for about the last week and a half.

MS: It’s not going to ease up at any stage over the next three months or so, either, is it?

TS: Yeah, I’ve got a big tour travelling all across America with Foy Vance. We had a pretty relaxed weekend; we got in from Germany on Friday and I played Boardmasters yesterday then we skedaddled as soon as I got done. Now, I’m playing The Ruby Sessions in Dublin, then I’ve got two days off. After that I’ve got to go to Green Man, then this tour finishes up in Austria at Frequency Festival. I get a month off before [the American tour with Foy Vance starts], so maybe I’ll go and do some more writing.

MS: It’s an exciting time for you now, then. You’ve got the tour and a new EP out. How’s that been received?

TS: It’s been really positive. Playing the lead single, it’s always a banger for people, which is very strange because I’m doing it solo; there isn’t a full band up there. I’m very happy with the last track, which is a spoken word piece, because I’m more into the avant-garde than anything. It’s the first time I’ve really had the opportunity to show that off my interests in that kind of stuff.

MS: You said in a facebook post earlier in the week that this was influenced by the cut-up technique of (Brion) Gysin and (William S.) Burroughs, how did you apply this to your own work?

TS: There’s a literary piece I put in there that heavily used it but I haven’t really applied it yet to songwriting. I’ve experimented with a lot of my personal, literary projects because it’s very fun to do. Eventually, I want to get more into it in terms of lyricism and stuff. Right now, I’ve got a very linear lyricism vibe and, eventually, I’d like to get more non-linear and see how that works. It’s just a bit more difficult I think with the type of music I’m doing because it’s so stripped back. The spoken word piece was basically linear for the most part, it was very stream of conscience. I worked with Justin Lockey, he sent me the track and I did a Kerouac-esque thing with that one.

MS: What does Tom Waits’ music mean to you? You guys have quite a similar vocal delivery.

TS: I think, as far as the vocal thing goes, he and I have roots that go through to the old blues and jazz singers. I guess, back in the day, they tried to whitewash that in America with the more Sinatra-esque thing. Jazz was transgressive and in the African-American communities. I think most of the influence I draw is from people like Louis Armstrong, Charlie Mingus or Dizzy Gillespie; I think that’s a similarity. I like [Waits’] storytelling, I like how he goes about his art and puts jazz influences into his work, which is something I want to do more. In my opinion, he is the most consistent and greatest American songwriter that we have.

MS: Have you ever found that being sincere or vulnerable hasn’t come naturally to you in your music?

TS: To me it’s easy, but I think I go through manic spurts. For people that watch my shows, they’re very loose and dictated by my mood that and by the mood of the crowd which isn’t always good. I can’t help it. It’s not like I’ll absolutely play badly if I’m feeling down that night; my songs’ll be more sombre; they’ll have more of a mellow touch to them. Whereas, if I have a crowd of 800 people packed in there all going nuts, I’m in walking around out there, having drinks and jumping into the crowd with my guitar. I just live life by how I feel, I don’t try to have a stage presence. I’m so, to a fault, dictated by my emotions in a lot of situations in my life and it just bleeds into my performance, if that makes any sense.

MS: There is an interesting correlation between artists like yourself, Whitney or Kevin Morby. There are a lot guys who seem to be wearing their hearts on their sleeves. Sometimes, when you get artists who are so sincere, that can trigger a really nice reaction.

TS: I think those are the kinds of artists that people should be listening to. With Morby, for example, there’s definitely a Dylan-influenced vibe that every singer-songwriter is, it’s impossible not to be. His lyricism is so true to himself. The Dylan thing is tagged on to every singer-songwriter so you just ignore it. With Morby, I really believe what he says in those songs, the album’s really great. Whitney even more so. I’ve known the guys for a litte bit, I haven’t actually met Kevin, yet.

Whitney’s album, it’s really funny if I can go on a little tangent here, was dubbed something like ‘Summer Album of the Year’. It’s a very sad record, actually. He’s talking about how he just wants to get loaded and dealing with all the crap, I think that reflects a lot on my generation. A lot of us are consumed by different addictions to things to supress emotions because we’re so traumatised by multiple things that have happened within our lifespan.

Whether it’s our divorce rates; 9/11; The Iraq War or whatever. We’re bombarded all the time with all this tragedy and we get to a point where we say: “Ah, fuck it. I don’t even want to care anymore.” That’s what that record really says to me and I just wish that music critics and journalists, not knocking anything you do, would just take the time to think about those things. There’s more to music than what’s happening sonically.

7 hours 35 min ago With his highly-anticipated new album dropping early next year, Miles Kane has now unveiled the n

7 hours 28 min ago Just when you think the indie-rock scene has reached peak saturation, an artist comes along and f