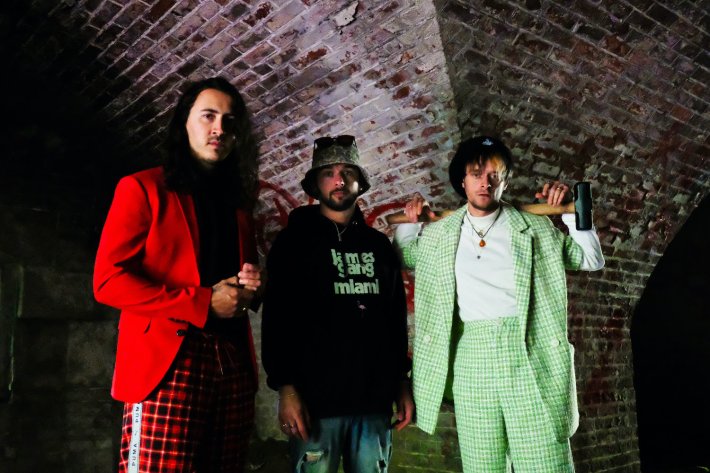 Following on from the enormous response to their brilliant debut EP 'M?' last year, which gained plaudits from the likes of Jack Saunders and Huw Stephens upon its release, seismic psych-punk trio Mystic Peach are back at it once again with their explosive new single 'Ursodfrnt'.

Bringing back more of that broad and inventive direction they are known for, 'Ursodfrnt' sees them deliver one of their most impactful offerings to date. Jam-packed with ferocious hooks and blistering riffs throughout, these guys are really setting themselves apart from almost anything else going on right now.

Speaking about the new release, the band's vocalist and guitarist Curtis Gale said, "This is our perspective of a modern society where we spectate on petty, point scoring and vindictive lay-abouts that lack the initiative to take up a hobby that isn’t scanning strangers lives. A simple, dumbed-down ‘utopia’ that has no room for simple life. So here’s a song to suit the needs of modern life, a verse that promises so much, but the chorus is lacklustre. Senseless lyrics with words that no one knows what it’s meant to mean. A perfect recipe to attract attention of our fellow primates.”

Mystic Peach will be heading out on tour across the UK and Europe this autumn, and you can check out the new video for 'Ursodfrnt' in the player below.