The band's new single 'Break Me' is out now 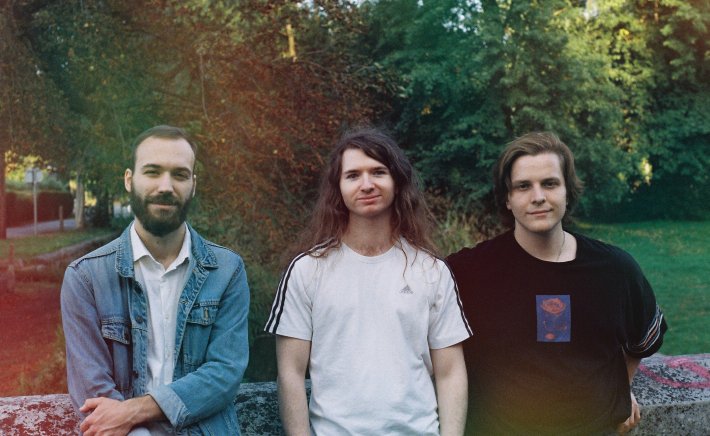 Following on from a slew of bright and impressive releases over the last year, London-based outfit deafpony have now returned with their latest uplifting cut 'Break Me'.

Channeling the light and upbeat indie-pop flow of The Maccabees and Bombay Bicycle Club, 'Break Me' showcases some of the trio's best work to date. Filled with soaring hooks, anthemic production, and catchy vocals throughout, their newest delight is sure to bring a smile to your face.

So with the new single doing the rounds right now, we sat down with them to find out more about their background and what has inspired them most over the years.

We all actually became friends because we played classical music as kids, so I guess the first instruments we fell in love with were the violin and trombone. But that’s kind of a boring answer, we really bonded over and fell in love with weird looking guitars and stacks of distortion pedals when we were about 16.

deafpony probably wouldn't exist without the album ‘I Had The Blues But I Shook Them Loose’ by Bombay Bicycle Club. That album was the catalyst for starting the whole thing, and to be honest we just wanted to sound like that album for the longest time. As we’ve gone on we’ve got more into ambient and electronic influences, like Radiohead and Tourist, but we like to retrace our steps back to Bombay Bicycle Club every once in a while.

Muse, except Steven who had much better taste. Although Scott gets a lot of stick for not listening to My Chemical Romance.

It started as an outlet to process some mental health stuff we were going through at the time, but it’s kind of just established itself as a thing now. We’ve been creating music for so long together I’m not sure we could even imagine ourselves not doing it. It’s just what we all love doing and nowadays having fun together is an inspiration in itself.

Scott: I only just discovered Tourist’s album Wild that came out last year. I really like their music but this one sailed by me it seems, so I’ve been playing catch up. Oh, and the new Bring Me The Horizon EP is really good, that one has been scratching my DOOM soundtrack itch.

Mikey: I’ve had Redwood’s new album Beside A Shallow Sun on basically non-stop in my car since it was released. I’ve also been absolutely obsessed with the new Dorian Electra album - any artist that manages to feature Village People, Pussy Riot and Rebecca Black in one release gets my vote.

Steven: Recently I’ve got very into Spiritbox, their music is absolutely fantastic and it’s also refreshing to finally see some diversity in the metal scene which historically (with notable exceptions) has been dominated by a lot of the same kinds of angry macho white men. I’ve also been a fan of Deftones and System Of A Down for a long time and they’ve both put out new music recently, so I’m having a great time.

All of our songs are autobiographical for the most part, deafpony has manifested itself as a documentation of a lot of the significant relationships and struggles we’ve been through. The majority are chronicling the ends of relationships, to be a bit cliché, but that’s what was inspiring at the time and deafpony was a means to help to come to terms with those relationships ending. As time has gone on though, the writing has opened up to other subjects which has been really refreshing.

When we filmed the music video for our recent track Some New Bruises to Share, we were all on holiday together in Wales. On our last day there, the biggest storm in years hit the UK but we all had to get back for work, so we ended up having to sail a Honda Jazz (which I believe is known as the Honda Fit in North America) through massive floods all over rural South Wales during a severe storm warning, blasting the Pirates of the Carribean theme as we went.

If we hadn’t spent all that time in bands as teenagers, would we have spent that time productively? Playing sport or consuming culture? Probably not, we would have just played more Minecraft. Maybe we would have been YouTubers.

To me there’s not really one piece of advice that stands out, it’s been a process of collecting lots of little tips or tricks here and there that has accumulated into the musicians we are now, a ‘greater than the sum of its parts’ kinda vibe. I guess our advice then would be just try to absorb everything you can, recognise what works for you and what doesn’t and remember that no one else knows what they’re doing either.

deafpony's new single 'Break Me' is available to stream and download now. Have a listen to it in the player below.

48 min 53 sec ago With their highly-anticipated new album set to land at the end of next month, Maxïmo Park have no