His new single 'Sisyphus' is out now 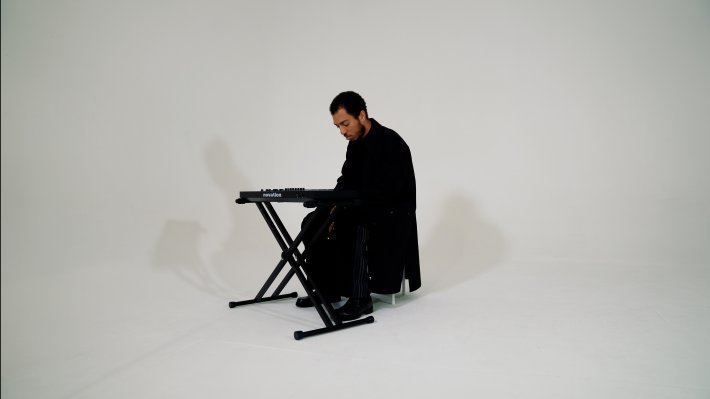 Having already knocked out a wealth of bold and enticing offerings over the last few years, fast-rising artist Jordan Barritt aka Moonkay has now returned with his mesmerising new single 'Sisyphus'.

Channelling the same broad and genre-bending aesthetic he has built a reputation for, 'Sisyphus' makes for a wonderfully powerful listen. With its sweeping textures, soaring atmosphere, and his own captivating voice layered throughout, this new one really stands out as a distinctive and unique addition to his growing catalogue.

My first instrument was the drums, but I really fell in love with learning piano. There’s something really interesting about the limitations of drums, but learning the piano made me feel like I could be the whole band, and essentially drove me to production.

I grew up around a lot of jazz and blues, but my first real love was in rock. I loved bands like Muse and The Clash. It was only when I was about 14 or so that I started to get into more experimental music as well as rap, and found the kind of music that most heavily influenced my current sound. Since then artists like Shlohmo and Flying Lotus have played a huge role in influencing what I make.

I remember saving up for a KT Tunstall album and absolutely rinsing it on my MP3 player. I remember her drum mixes being super crisp.

Probably Windowlicker by Aphex Twin. It just has so many unique elements that work and compliment each other. I remember coming across the music video for it in the early youtube days and absolutely hating it, crazy how the mind works and your tastes can evolve like that.

I’m especially productive on train journeys, my family is about 2 hours away from where I live and I usually find myself making my best stuff on that journey. Other than that i’m honestly a really boring producer, I like having a simple setup and just using the same tools over and over again because i’m comfortable with them and can harness them to their fullest. I just bought a new keyboard, I’d been using the last one for 8 years.

I’ve been listening to loads of musicians who have a similar vocal delivery to myself as I'm still getting used to experimenting with my voice compared to the production side of things. Artists like Dean Blunt, Jonatan Leandoer96 and Lucki have been heavy in the rotation.

Definitely Shlohmo. Seen him live every chance I’ve gotten. Last time I met him I told him I'd open for him one day, so it's just a matter of time now haha.

The reactions. I got so used to just working on beats and working for other artists, whereas lately I've really been using my energy solely on myself. I’ve had one guy on Youtube who’s been commenting on all my latest videos, and knowing someone like him is waiting on me for new shit really drives me to put out more and put out my best.

The way this industry is so dependent on who you know. That’s the reason you see people signing label deals, or going from nobody to big overnight. I’m confident in my music and I believe in the process, but I’m really quite quiet and closed off when it comes to shit outside of my music, it’s something I really need to learn to be better at.

Trust the process, and do this cause you love it and not for the money; ulterior motives will only lead to disappointment.

Moonkay's new single 'Sisyphus' is available to stream now. Watch the new video for it in the player below.

1 hour 45 min ago Following on from the release of their highly-praised mixtape 'Rōnin I' in March last year, UNKLE