The frontman's new single 'Virtues' is out now 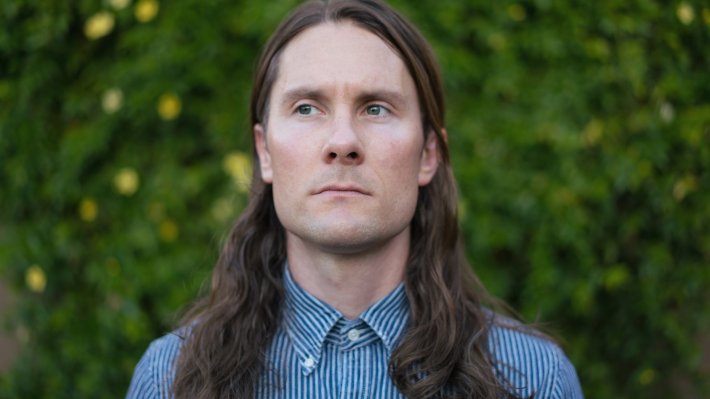 Having already established himself as a member of The Bergamot these last few years, singer and songwriter Nathaniel Paul has now returned to deliver his debut solo single 'Virtues'.

Channeling the rich and dynamic sound of acts like Thom Yorke and Eels, 'Virtues' makes for an incredibly warm introduction to the artist. Filled with bright and sweeping tones, masterful production, and some brilliantly soaring vocals, his first solo effort marks an vibrant leap forward for the man at the helm.

So with the new single doing the rounds right now, we sat down with him to find out more about his background and what has inspired him over the years.

Guitar. I was addicted from the first time I picked it up. I started learning some Nirvana licks and honestly never looked back. I painted a shed to earn the money to buy my first Epiphone. I still love that guitar as much as I did back then.

I’ve never really thought about this, and as much as I would love to make up some profound answer, the most likely thing is growing up in Indiana, playing in a few bands. I used to spend a lot of time listening to records in the basement and wrote my first book report on Jerry Garcia.

I was an angsty little man. I was really into The Grateful Dead, Nirvana, and Smashing Pumpkins. My brother and I used to listen to Silverchair’s Frogstomp on repeat, jumping off the sofas and shit, headbanging. I still love that record to this day.

Wherever and whenever you can find time and space. Living in NYC, we were always reminded that if you don’t set time aside to rehearse and write, it just never happens. Life just constantly tries to overwhelm you. You have to create time and space and let the music and creativity become a ritual. You can’t always expect to be on point, but you’re giving yourself a chance if you regularly sit down to write.

Currently with “Virtues” and “It’s All A Rage” I have been reflecting a lot on the desert landscape we have been in since quarantine hit us. The whole Nathaniel Paul record, which comes out March 24th 2021, is really inspired by the desert. It is just an amazing place to find solitude and write. It just has this energy about it.

I’ve always loved Beck. He is just a fountain of great songs and productions. Sufjan Stevens is very much the same. I also find myself going back to 12 Rods’ Split Personalities. Glass Animals, Wilco, Spoon, Mac DeMarco, and Kings of Convenience, too.

Quite a few. I think those characters run around in my tunes. I try not to dedicate the whole track to them, but I throw some shade when necessary.

Bilbo Baggins. We had just finished a really miserable show in a new city. We desperately needed a place to stay that night. No payout. A fan offered us a free bed. Problem was: it was me, my wife, and our drummer. I told the drummer that the host wanted to “make him her Bilbo Baggins.” God, we almost got in a wreck we were laughing so hard. It’s always the drummer, right? We picked up a seedy hotel outside the city. Drummer slept on the couch.

Of all time: Pink Floyd, and I would try to play through all the live gear they travelled with. They were always trying to break the sound barrier. Current: probably Beck, Mac DeMarco, or Dave Matthews Band. I have a tremendous amount of respect for the songs those guys have crafted.

My father is an accountant and lover of music who is spending his retirement building speakers from scratch, and I’m tempted to say that I would have followed in his footsteps. I could also see myself as a bread maker or some kind of coffee connoisseur. Thank God for music.

The best songs never write themselves. You have to be really persistent. Show up and do the work day after day. Writing, touring, performing, on and on. Every aspect requires so much effort, creativity, and attention to detail. Nothing just falls out of the sky. It’s just a lot of hard work and a shit-ton of rehearsing. If you’re ultimately meant to do it at a high level, you’ll love that work, and it will nourish you. Learn to appreciate the small advances and wins. Nothing you achieve will ever be enough, so celebrate along the way. And write the best damn songs you can. That’s what makes it worth it in the end.

I pride myself as a musician. Truth be told I am a video editor, designer, developer, and promoter. The Bergamot is releasing another full length record and our first ever documentary called “State of The Unity” in 2021. That made me really refine my video editing skills and design work. You have to learn to diversify your work and your skills. Always strive to be better at anything and everything you do. The artist's life is going to demand that you can learn and adapt.

Nathaniel Paul's debut single 'Virtues' is available to stream and download now. Have a listen to it in the player below.