Getting To Know... Ponte Pilas

Getting To Know... Ponte Pilas

Their debut album 'Old Enough To Know Better' is out now 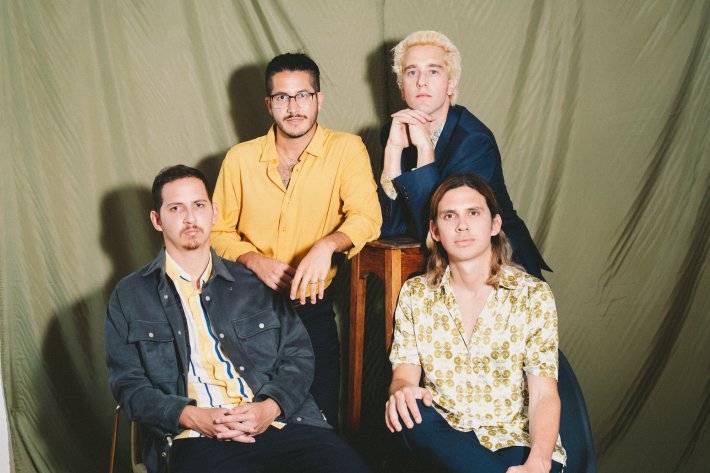 After establishing themselves with a flurry of fresh and explosive indie-rock jams these last few years, Berlin-based outfit Ponte Pilas have now delivered their long-awaited debut album 'Old Enough To Know Better'.

Channelling a wonderfully rich and dynamic direction from start to finish, 'Old Enough To Know Better' perfectly illustrates their glittering tenure to date. Filled with bold and exciting textures, a vibrant atmosphere, and killer hook layered throughout, they are certainly looking to turn plenty of heads with this one.

So with the new single available to stream now, we sat down with lead singer Calum Bolland to find out more about his background and what has inspired him most over the years.

My first instrument actually was the viola, which I loved playing. I was classically trained for many years throughout school. I also played the Scots fiddle, touring Europe with a school ceilidh (traditional Scottish dancing) band. If the voice counts though, I always enjoyed singing and even spent some time in the National Youth Choir of Scotland. I like to think I’ve left behind these stuffy, classical roots though now as Ponte Pilas are a little more rock ’n’ roll.

I was into classic rock from a young age, that was the first type of music I remember consciously listening to. We didn’t have a computer, so my uncle used to burn me CDs of music featuring AC/DC, Led Zeppelin and Guns ’n’ Roses for me. He was always sure to include something a little more ‘highbrow ‘ on there though, I remember one CD where he had snuck on Mrs Robinson by Simon & Garfunkel to mitigate my heavier leanings.

The first CD I bought was Meatloaf’s ‘Bat Out of Hell’, an album I still love. Rest in Power to the big man!

There are a million songs I wish I’d written, but if I had to pick any one right now it would probably be Life on Mars by David Bowie.

All of the band members enjoy writing musical ideas, so generally what we do is squirrel away voice notes and fragments locked away in our own rooms and then come together to share these. Or, if the ideas are shite they are pretty quickly shot down. If something has legs, if the rest of the band react favourably, then we try to flesh it out a little bit and build upon it. The eventual song generally is a mad Frankenstein’s monster stitched together from these disparate influences. And we don’t jam. That’s band policy.

The Chats consistently blow my mind, and they’ve been drinking heavily from the AC/DC font of influence too. The Viagra Boys are one of the best live bands out there in my opinion too, and I caught IDLES this year which was a delightful kick in the teeth.

If we ever shared a stage with Iggy Pop, who is a true rock ’n’ roll deity, I think I may retire. Go out on a high.

The money. Haha! No, the chance to share our music and to drive a room to manic, cathartic release in the hour or so we share with a crowd is a joy like few others. It’s probably the greatest high you can experience.

The professional music game is one designed almost entirely for consumers. Which is great! We are also consumers of music, of course. But when you see just how difficult it is for small to medium bands to “break through” it can be quite depressing.

Show up on time. Heard that from an interview with Alice Cooper years ago and couldn’t agree more. Being late isn’t rock ’n’ roll, it’s a waste of everyone’s time and pretty quickly you’ll earn a reputation as a bit of a dick.

Ponte Pilas' new album 'Old Enough To Know Better' is available to stream now. Have a listen to it in the player below.

8 hours 24 min ago With her highly-anticipated new album just a few days away, Courtney Marie Andrews has now droppe