Getting To Know... Rich Chambers

Getting To Know... Rich Chambers

His new single 'I Saw Her Standing There' is out now 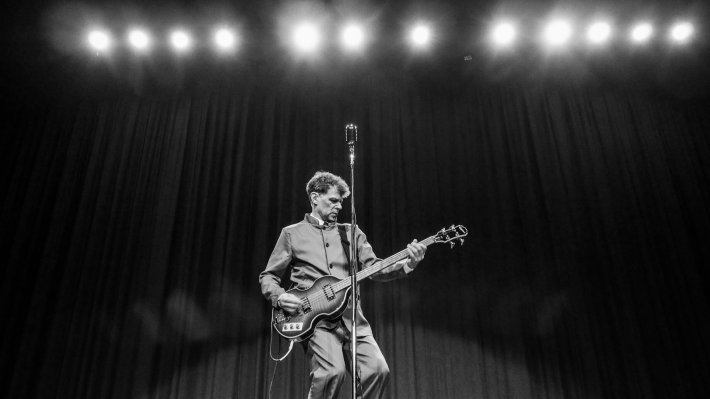 After a flurry of fresh and exciting releases in the last few months, emerging artist Rich Chambers recently returned to deliver his energetic new single 'I Saw Her Standing There'.

Reinventing the classic Beatles anthem for a modern ear, 'I Saw Her Standing There' makes for a wonderfully bold and driven listen. Jam-packed with vibrant pace, killer hooks, and his own mesmerising voice at the helm, you'll be shaking your hips to this one from start to finish.

So with the new single available now, we sat down with him to find out more about his origins and influences over the last few years.

This is an easy one. It was definitely the guitar. I have some very early recollections of my dad bringing out his guitar on holidays and at other family functions, and I used to always think it was pretty much the coolest thing I had ever seen. I had a little Mickey Mouse toy guitar that I would pull out of my toy box so that I could sit down next to him and jam with him. I always wanted to be able to play guitar just like my dad.

The first pop/rock bands I ever got really into were the Monkees and the Partridge Family. A huge reason for this was because I was watching the shows for each on TV. I thought the shows were pretty awesome. Mom had records for each of them and I used to play them continually. I can remember at one point finding my mom’s old copy of the Beatles’ “A Hard Day’s Night” and I ran up to her and asked her who these guys were that were copying the Monkees! Lol! I was a very little guy at this point, not even grade school age yet, but I loved music and it was definitely becoming a huge part of me even at this early age.

Hmm… I don’t remember the first album I ever owned, but I do remember my first ever vinyl 45s. I was a pretty little guy but I had a small transistor am radio that I used to carry around with me everywhere. I always had it tuned to the top 40 stations, and that first summer I had that radio I fell in love with Paul McCartney’s “Listen to What the Man Said” and Paper Lace’s “The Night Chicago Died.” Knowing how much I loved these songs, Mom took me to the record section at the nearby Hudson’s Bay department store and bought me those two 45s. I cherished them like gold and played them nonstop. I still have those two 45s tucked away in storage. I definitely won’t be parting with them anytime soon! Some great childhood memories associated with those two records.

Oh my, there are so many songs I wish I could have written, but I think I have to go with one of my most favourite songs ever written and recorded and that is John Lennon’s “Happy Xmas, War is Over.” I absolutely fell in love with the song the first time I remember hearing it in my early teens. I have always been a massive Christmas fan, and I simply could not believe how well, in my opinion, Lennon had encapsulated that “Christmas feeling” in a pop rock song. I firmly believe it is one of the best pop Christmas songs ever written!

Great question, but I have a pretty simple answer for you, pretty much none whatsoever. I have never been the kind of artist that has to be in the right “mood” to write a song or to have any kind of pre conditions being met. I can write songs anywhere and at any time, and I have. I am a firm believer that you have to be adaptable in all things in life and be ready to change, shift, or move in response to what is happening around you. It’s a mindset I feel very fortunate to possess as it has allowed me to capture all kinds of life moments that become songs that I would not have if I was a writer who had to have all things “just so” in order to write a song.

Okay, I am looking at this question from a literal perspective and I can tell you who I am currently listening to in my car right now. For the last three days I have been listening to Green Day and their 2020 album, “Father of All Motherfuckers.” This album has not gotten a lot of attention, but I absolutely love it. The songs are sharp, crisp, intelligent, and efficient. It’s a great album! I also have been listening to Waylon Jennings who could be my most favourite country artist of all time. The third artist I am currently listening to is Louis Prima. I didn’t get into Louis Prima until about ten years ago when I first heard one of his tracks in a movie. I fell in love with him and sought out his music after that. It’s great stuff, part New Orleans jazz, big band swing, and a little bit of early rock n’ roll.

Man, this is actually a seriously tough question. I have so many artists that I absolutely love and would love to meet, jam with, or open a show for. Having lived and grown up in Vancouver when Bryan Adams was first making it big from out of Vancouver, I would put him on the list for sure. I have always loved the music of Melissa Etheridge, not to mention her courage and authenticity to be herself in all things, so she is in there as well. I would love to open for Elvis Costello, who in my opinion, is one of the most intelligent and cerebral pop/rock songwriters ever. But, if I had to narrow it down to one, it would have to be Bruce Springsteen. I could go on and on as to all the reasons why that is, but I don’t need to. He is the Boss after all!

There are so many things I love about being a musician. First of all is the simple fact that you automatically become a member of a worldwide community of people who share a passion with you and who are generally very friendly and supportive. I have met so many amazing people as a result of being a musician and songwriter. It is something I am very thankful for. I also absolutely love the excitement I feel every morning when I get up and out of bed. I am excited about the songs I am working on, the songs I am releasing, and the songs I have yet to write. The list goes on, and it is a pretty amazing and non-exhaustive list! I also love the fact that I can pour all of myself and everything I am feeling and thinking into my music and a song. Music and songwriting continually helps me to make sense of who I am and the world around me. It is a pretty amazing thing!

Hmm… hard to come up with a frustrating part. It is of course frustrating to continually work at getting my music to the mainstream and feeling like things just are not happening fast enough, but this is not something exclusive to being a musician. It is something that drives people throughout any industry and/or passion experience. I actually feel quite fortunate that this frustrates me. If it didn’t, then I would have to question how much drive, determination, and passion I really had.

I can’t think of any one piece of advice I have received that has really stuck with me or that I have found uniquely profound. Instead I choose to subscribe to my own advice that has been carved out of many experiences and the crossing of paths with many different people, from the extremely supportive ones to the completely dream-killing negative ones. Here is my advice to me and to others:

Get used to hearing “no” and rejection. Don’t let it get you down. Instead, choose to learn from it, improve your craft, keep a positive perspective, and keep forging ahead with a “never give up” attitude.

Rich Chambers' new single 'I Saw Her Standing There' is available to stream now. Check out the new video for it in the player below.