The band's debut single 'Fill Me Up' is out now 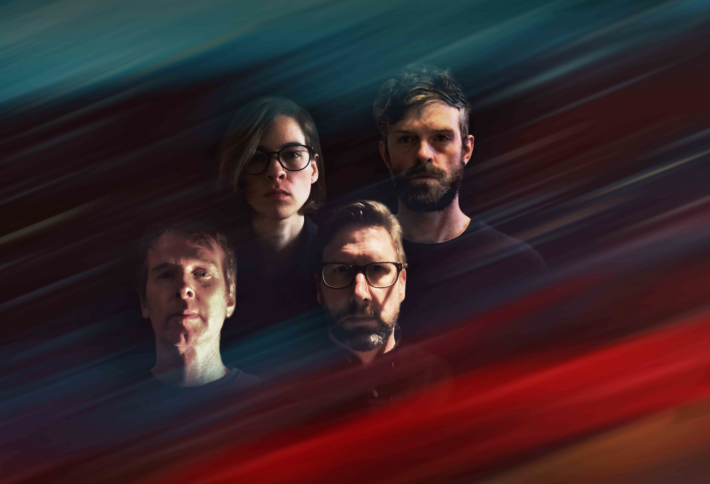 With a strong love and affinity for everything new wave, dream-pop, indie-rock and shoegaze, Toronto-based outfit SWiiMS have now looked to bring their diverse sound to the world as they unveil their debut single 'Fill Me Up'.

Taking their cues from the likes of Pixies, Slowdive and Beach House, 'Fill Me Up' is one of those rare offerings that has both a nostalgic and contemporary edge to it. While it follows familiar aesthetics and tones throughout, there is something wonderfully distinct and fresh about its delivery, giving them a broad and exciting benchmark to start from.

So with their new release brightening our day throughout, we sat down with them to find out more about their origins and what has inspired them most over the years.

Mai: My dad had a classical Yamaha lying around the house. When I was about 12 years old, I grabbed it and started trying to figure out how to play my favourite songs on it. I still have it with me - I brought it to Canada from Argentina and love playing it every day.

Cian: Pretty boring, but acoustic guitar. I got one for my 16th birthday and can’t go a day without playing it.

Mai: The complexities of love and relationships.

Colin: Figuring out what I truly like about different styles of music and making them work together.

Cian: I’m most inspired when playing with people so all the amazing people I’ve been lucky to play with over the years.

Ken: The combination of styles we all bring to the table.

Mai: No Doubt - 'Don’t Speak' was the first complete song I learned to play by myself. I used to play it in the first band I had with two good friends in my hometown.

Cian: I never had a ‘I want to pursue music’ moment, it just became a part of me. I remember being captivated by Neil Young’s Unplugged record as a kid, and once I started playing myself I couldn’t imagine life any different.

Mai: Never the same as the previous morning. It depends on my energy levels.

Colin: whatever pops up on my playlist next!

Cian: Just the radio, I like to feel connected to the outside world.

Mai: All of my songs are either about relationships or moments spent with people. So, all of them I guess.

Mai: Definitely getting signed to Mint 400 Records, and the release of 'Fill Me Up' has been so exciting. Can’t wait to see what happens next.

Colin: having people respond so positively to SWiiMS.

Cian: First audition with SWiIMS, wouldn’t be here without it.

Mai: I love architecture, and design in general.

Cian: Anything creative or outside.

Mai: Architecture is my full time job but as a hobby I would have loved to pursue illustration art.

Colin: I have developed a real love for recording and would have loved to work with musicians in studio.

Cian: Probably a carpenter or something like that. I need to be doing something with my hands.

Ken: No life without music.

Mai: Trust your instincts about the direction you’re taking.

Colin: Writing is a muscle that needs to be exercised. It takes a lot of practice and work to develop it. Make time every day to do some, make it a priority.

Cian: Write songs and put them out there. Record yourself and listen back.

SWiiMS' debut single 'Fill Me Up' is available to stream and download now. Have a listen to it in the player below.

1 day 18 hours ago With his highly-anticipated new album now less than a month away, Jake Bugg has now unveiled the

1 day 18 hours ago After spending much of the last year developing and cultivating their sound, emerging Australian