Their new single 'Too Much Trouble' is out now 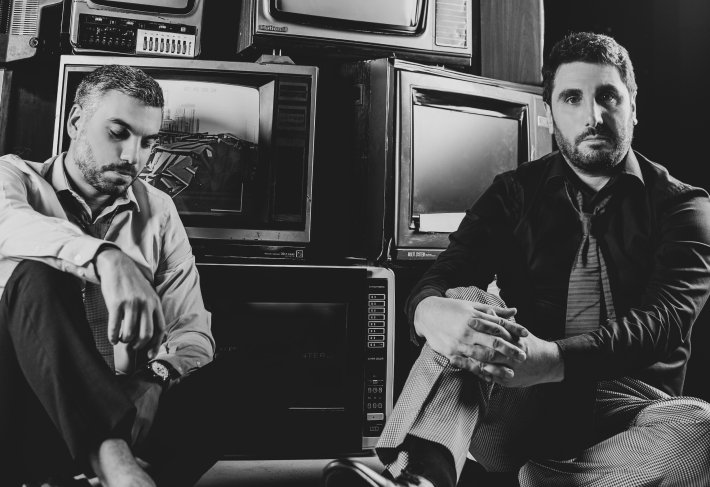 With their highly-anticipated debut album set to land later this year, Dubai-based duo TeleChild are now whetting our appetites with their vibrant new single 'Too Much Trouble'.

Channelling a wonderfully smooth and driven indie-rock direction from start to finish, 'Too Much Trouble' makes for a brilliantly fresh listen. With its pulsing grooves, catchy hooks, and captivating vocals layered throughout, be expected to have this one running through your head for hours afterwards.

Charles: I took piano lessons as a kid for about 5 years but then my uncle bought me my first classical guitar at the age of 15 and it was love at first strum. He was a big fan of the folk singers like Neil Young and Bob Dylan which influenced me growing up.

Hadi: The guitar for sure and I got Charles to blame for that. We were at a house party (this is decades ago by the way) and then at some point in the evening the host decided to blast Pink Floyd’s Comfortably Numb solo from the Pulse live concert. Charles in his drunken state picks up a guitar and pretends to play the solo. I remember thinking to myself this looks like fun…

Charles: Pink Floyd had a big influence on me. I remember when I was introduced to Floyd by a friend who made me listen to their epic 23 min track called Echoes and I was directly hooked. I don’t recall caring much for music before that happy incident. I was also a big fan of Led Zeppelin, nothing beats Robert Plant’s vocals.

Hadi: Literally any pop song that was playing on MTV or the radio. I listened to 80’s one hit wonders in the backseat of my dad’s car, I used to try and mimic Michael Jackson dance moves in front of the mirror, Mom used to make me listen to the Beatles early stuff a lot. I was into anything that was catchy. It wasn’t until a high school friend of mine who gave me Tool’s Aenima album on cassette that I made the transition into rock.

Charles: I don’t remember very well but I believe it was a tape of Bryan Adams (So Far So Good) and this was before I was introduced to rock music by my friends.

Charles: It’s a very tough question, if I had to choose it would be a close call between Pink Floyd’s Us & Them and Radiohead’s Nude. I have always been a fan of mellow emotional/dreamy songs.

Well we can start by showing you the number of audio and voice notes exchanged between our phones. The demo recordings never stop! The way it goes is one of us comes up with some piece of music usually in the form of a rhythm guitar with some melody on top of it. Then through multiple iterations the piece evolves with more refined layers of melodies and harmonies. We tend to combine different parts that we’ve written separately and figure out a way to stitch them together if they make sense. And that explains why our latest song “Too Much Trouble” has two distinctive parts with different tempos but somehow they go together.

Charles usually gets inspired when he’s sitting alone with his guitar, he’s responsible for the dreamy mellow aspect of TeleChild. Hadi’s melodies and tunes come when he’s taking a shower oddly enough. A lot of the lyrics were written while just cruising in his car. Inspiration can come at weird times and cannot be forced. A chunk of the album was written whilst on a trip to Thailand. Being in nature outside of Dubai opened up our minds, we must admit.

Charles: I was introduced to Radiohead in the last 10 to 15 years and I cannot thank them enough for releasing In Rainbows (one of my favorite albums ever) so Radiohead music is always in my playlists; at the moment I listen a lot to Arcade fire, Sufjan Stevens, Damien Rice, Blur to name a few also I love to listen to blues specially SRV.

Hadi: I’ve been listening to TeleChild tracks lately haha. It’s just nice to see your song available on those streaming platforms, with the artwork and lyrics displayed for anyone who’s interested. Besides that, I just pick a customized playlist and let it run while I work, cook, drive, or go for a walk. I swear these music algorithms know you better than you know yourself.

Charles: Radiohead. I believe they have a style that I can relate to anytime, it would be an honor.

Hadi: anyone who would have us… can’t be picky at this stage. Did Charles just answer the last 3 questions with Radiohead by the way? Well you can’t say he’s not consistent.

The writing process for sure. Nothing beats that sensation when you know you got a good guitar riff or melody going and you can build a song around it. There’s just something about picking up a guitar and jamming (apologies to the neighbors), choosing the right lyrics that fit the right tune, debating what tempo to choose, realizing that an old lick you wrote 6 months ago works on a new part… It's just fun and keeps us sane and fulfilled outside our daily jobs and routine.

Recognition is also rewarding, we won't deny that. It’s always nice when someone hears your song, reaches out and tells you how much they enjoy it and asks how come it’s not playing on the radio yet. It doesn’t happen that often but it has happened haha.

Music is cheap…that’s the sad truth we came to terms with after pouring our hearts and souls into our album. What we mean by it is that most people don’t really care about your music, no matter how good or bad it is, unless it’s being shoved in their faces constantly so that they finally pay attention to it. There’s a lot of noise out there and we have to compete against it and hope there are people willing to listen through the noise.

The hardest part by far is the promotion aspect. Building a following from scratch and unfortunately starting in COVID times when live gigs weren’t allowed anymore; that’s tough. Social Media and digital platforms do come in handy these days, but you also have to learn how to navigate those and worry about algorithms and what is the ideal time you should post something…It’s so frustrating we actually wrote a song about it.

“Post content every day”. No we’re kidding, obviously not a motto we live by but we actually received it as advice when we started promoting our work. On a more serious note, be patient and don’t have too many expectations from people or the industry. Also, write music that you would listen to. Finally, guitar tone and effects wise, always go analog.

TeleChild's new single 'Too Much Trouble' is available to stream now. Watch the new video for it in the player below.

11 hours 21 min ago With her eagerly-awaited new remix EP landing next month, Bess Atwell has now shared the next cut

14 hours 16 min ago After an astonishing run of form throughout his releases over the last decade, South African sing