Getting To Know... Theo Kandel

Getting To Know... Theo Kandel 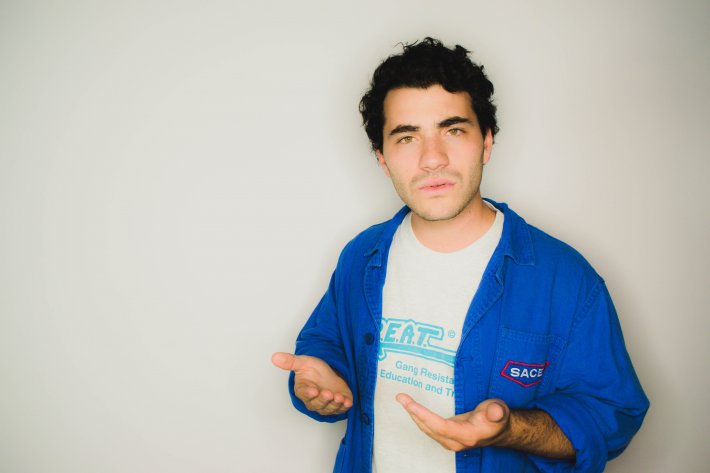 Having spent the last few months releasing the first two volumes of his ‘Love & Other Complaints’ project, a series of two-song releases bound by their production styles, Nashville-based singer and songwriter Theo Kandel now returns with his third outing in the collection with the singles 'Around The Bend' and 'Little Shifts'.

While 'Volume 1' featured an electro-folk synthesis and 'Volume 2' showcased a roots-folk vibe; in Volume 3, Theo takes it up a gear into indie-rock/pop territory on his latest pairing. Cementing his rich and laid-back qualities throughout, these new offerings look to showcase a more earnest side to his sound, capturing the warm magic that has become instilled in his own storytelling aesthetic.

So with his new releases available now, we sat down with him to find out more about his background and what has been inspiring him over the years.

I started playing violin when I was 5 years old - I was one of those little orchestra kids and I loved it for a long time. I played pretty seriously through high school, but started playing guitar when I was 12. Every now and then I’ll toss a little string arrangement on one of my songs (re: Older Now), but I think violin gave me a specific understanding of music that’s based around melody.

I’m not sure if this counts as a prominent inspiration, but all I want to do is make people feel some kinda way, whether that’s happy or sad or both at the same time. That’s the coolest part of music to me and the thing I look for the most when I listen to music – basically am I going to cry or not. Writing music that’s personal to me but having it be accessible to a ton of people is the goal, and I think that’ll always be the goal.

Basically the same kind of music I love now – folk, baby. Simon & Garfunkel, James Taylor, John Denver (I think he’s folk), Joni Mitchell, all that jazz. Some more modern artists that I went crazy for as a teenager (and still do now) are Shakey Graves, Shovels & Rope, The Lumineers – all kind of in that folk/Americana vein, whether or not my actual music reflects those inspirations anymore.

I was actually playing Rock Band alone on my Xbox when I was 12 and I was singing “Dani California” by the Red Hot Chili Peppers and I got 100% and I was like “damn, maybe I should just pursue a career in music if I keep hitting 100%.” So then I nailed a few more songs and that kinda sealed the deal for me.

I have a bunch of friends in Nashville that are making awesome music – I don’t think I can name them all but I’ll give it a try: Ben Kessler, Lackhoney (& The Hive), Tyler Dial, Justin Johnson (who produces all of my stuff), New Parlor, Dylan Rockoff.

As for other artists, I’ve been absolutely destroying the new Ruston Kelly album on repeat for the last few weeks. Obviously the new albums from Phoebe Bridgers and HAIM are awesome as well; I’ve been vibing big time with Adam Melchor and Andy Schauf.

Pretty much any song that isn’t about myself has something to do with someone else; it’s way easier for me to find inspiration from things in my life rather than something else. That being said, I’m always looking for little things or lines to put in songs from other sources. Reading a lot of books can be super helpful for me if I need to find a mood or a line.

I played a small festival up in Wassaic, NY five years ago – the set went super well and it was a great time. I decided to camp out with the rest of the festival goers and woke up in the middle of the night to some super drunk dude trying to take down my tent. After I yelled at him to stop, I went back to sleep. When I woke up in the morning, I found a giant shit right in the entrance to my tent. Festivals, man.

Probably reading and writing – I was an English major in college, so I got a ton of that. I did my honors thesis in Creative Writing and ended up creating a pseudo-modernist collage kind of piece that was a combination of poems, short stories, manifestos, screenplays, songs, and drawings. I’m a pretty creative person (I know how that sounds, yuck) and I found music early on as the best way to channel the things I have to say, but I still enjoy writing out my thoughts in different forms as well.

In quarantine I’ve gotten really into building furniture – I’ve built bookshelves, desks, tables, and benches, all for my friends and myself. You could say I have a budding career as a carpenter. I found this really cool place up in Connecticut that sells reclaimed wood from old barns and houses, so I’ve used that for a few projects. There’s something so satisfying about working with my hands; in another life I could have pursued a career in craftsmanship.

The most frustrating but totally valid piece of advice I’ve received again and again is “keep writing.” It’s a classic line, but so true – every song I’ve written has made me a better songwriter, and as annoying as that sounds, it holds true for everything you do.

Other than that, I would say to just keep making the music you want to make. I’ve lost so much sleep trying to figure out the sound I thought people wanted to hear rather than pursuing the stuff that I thought sounded good. If you believe in your own sound, chances are someone else might too. This is something that I tell myself over and over, but I think when someone starts listening through all of your music, they don’t care if you captured that specific popular trope; they just want to hear who you are as an artist, a musician, a writer, and a person.

Theo Kandel's new singles 'Around The Bend' and 'Little Shifts' are available to stream and download now. Have a listen to them in the player below.

3 hours 28 min ago Following on from the release of their much-loved 2018 LP 'Resistance Is Futile', Manic Street Pr