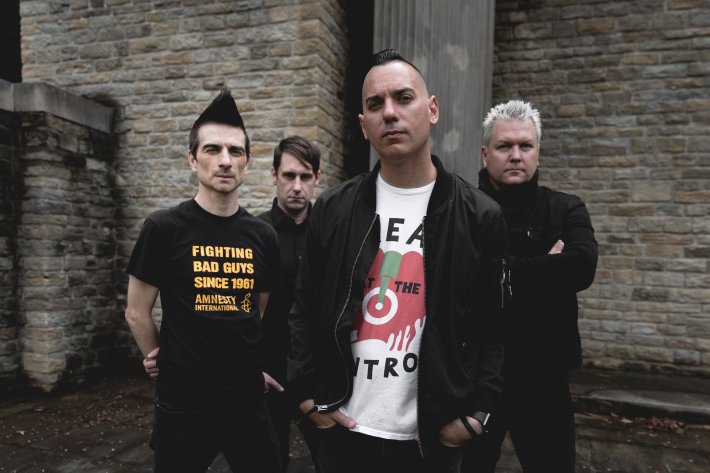 Since first emerging in the mid 90s, US punk-rockers Anti-Flag have grown from a humble and riotous outfit into one of the world's leading political rock groups. With a back catalogue of unending material that preaches acceptance, tolerance and activism, the band recently returned to deliver their twelfth studio album '20/20 Vision', a record that puts the US President front and centre of their latest work.

So with the band currently on tour throughout the UK, we sat down with drummer Pat Thetic to find out what made them go after Trump so specifically on this new full-length and what he sees the state of the world to be in.

This is the first date on your UK tour. You have just finished your European tour, how was the crowd in the rest of Europe?

It was awesome! The shows have been great, the new record has been well received. It’s that space between finishing a record and having a chance to play it to people, and a band’s life is very challenging because you have this thing that you are very passionate about, that you’ve made statements that you want to talk about, but nobody else has heard it yet. So it’s like an artistic, emotional and anger release that we are passionate about. So now we can play them and people can tell us whether they like them or whether they are shit.

Well, this record is full-blown Donald Trump and the racist piece of shit that he is, and also what he is trying to do by using scare tactics and preying on the most vulnerable people to have power all to himself. And that is a scary thing, both in the world and in the US. George Bush was clearly a war criminal. Obama used drones to kill people at will. Both are fucked up people and use their power for ill rather than for good. But Trump is on another level because he is trying to use his power for ill but also trying to amass more power so no one can do anything to him. We know that dictators and autocrats are very unstable people and when they have that much access to sheer weaponry and power, it’s never good for anybody else in the world.

We have noticed that over the years, you have regularly had pictures of The White House or government imagery on your covers but never a President. So is this intended as more of an individual targeting?

Yeah, we have never gone directly after anybody before. But we believe that Trump is a shitty enough person that he deserves to be on the cover, because he is the elephant in the room. Everything that is wrong with the world, doesn’t go back to him personally, but he is amplifying all those negative things. He is making them more acceptable in the mainstream, and similarly Boris Johnson. Boris Johnson is a piece of shit as well. He uses division, separation, and fear of other people to get power. And like we talked about in ‘American Spring’, revolution is contagious. It can travel from one group of people to the next because those group of people can say, “Hey look, those people used revolution to gain more freedom and more liberty. We’re going to use that as well”. Likewise, political leaders look at each other and say, “Well that one used racism and bigotry to gain power, I’m going to do that as well”. Which makes it more like a plague that moves across the world.

No, it’s very scary how salient the argument that we should fear everybody else actually is. This is what Trump is saying and so many people are still falling for that. It’s essentially that we gave the keys to the kingdom to a con man that is just continuing the con. He will do anything to amass his own power. And if you look at history, everyone compares Trump to autocrats and people like that. But if you look at Hitler, he came to power as a cartoon character and everybody misunderstood him. Even when he said he was going to exterminate the Jews, people still didn’t believe that he was going to do that. But we should really take these characters seriously, because they actually achieve what they say and everybody underestimates them.

Just jumping over to this continent for a minute. The UK has just begun its transition period from leaving the EU, and what everyone is worried about is that we are going to become disconnected from the rest of the world. Given that you are a US band touring the UK, how easy is it for you to tour around the EU currently?

Well, we have always had to buy visas to tour here, but it has always been relatively easy. Now they are putting up roadblocks. But that is just a symptom of the bigger problem, which is trying to stop the exchange of people, which is also the exchange of ideas. Music and art is only ever an exchange of ideas. People want to come together to discuss feelings and emotions, and when you put up those barriers, whether it’s Brexit, whether it’s a border wall on the Southern US, or the annexation of Crimea, all these things are separating people and not allowing that free flow of ideas to go back and forth. So Brexit is not good for communication, artists or creative people. But on the other side of the arguement, the EU was also being exploited by multinational conglomerates that used cheap labour to exploit workers. Not saying that Brexit is a good idea, but it makes it harder for us to do what we want in society, which is raise worker’s rights, raise environmental protection, raise food protection and not say we are going to go our own way so we can lower those things.

And now back to the music. What have you guys got planned for the year ahead?

Touring, touring, touring. It’s all we know how to do. We’ve been touring for 25 years straight and it gives us a chance to get out of our personal holes. When we sit at home, we become cynical and depressed because we are subject to the same media that everybody else is. And then when you go out and tour, you actually get to meet people who are making change and who are doing things that can make things better.

And you physically see that as a band when you are going around?

Oh absolutely. Yeah we meet people every night who say they work for PETA, or that they are a human rights activist. Even a lawyer who fights for immigration rights. We are able to meet these people every night and it is inspiring to us and makes us, as human beings, better.

Anti-Flag's latest album '20/20 Vision' is available to buy, stream and download now. Check out the official video for their single 'Hate Conquers All' in the player below.

11 hours 54 sec ago With their eagerly-awaited new album landing in just a few days, Yard Act have now unveiled yet a

11 hours 14 min ago Following on from a string of enticing folk-inspired offerings over the last year, Bristol-based