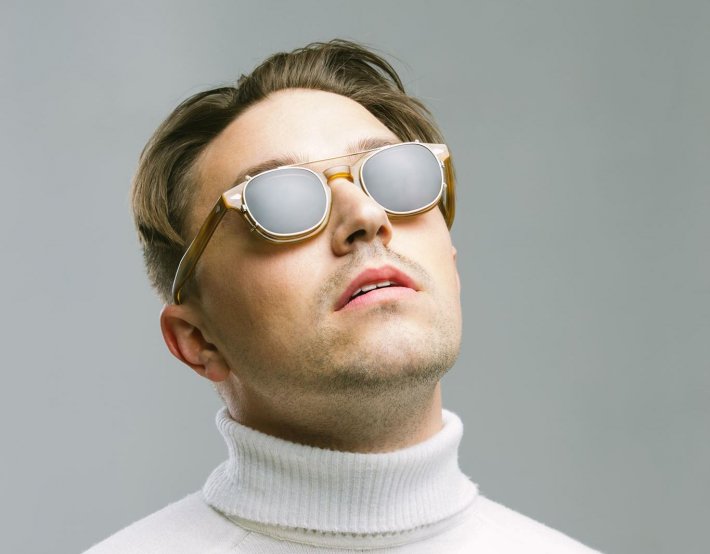 After leaving his formative band Kopecky back in 2015, guitarist Gabe Simon was at a loss creatively. Despite spending much of time since writing songs for the likes of Dua Lipa, Jai Wolf, Cherub, and MAX, he became frustrated that he wasn't able to express himself as a musician and so started a new project with friend and Foster The People drummer Mark Pontius. Together, the pair formed Mr. Gabriel, a project that is less than a band and more of an artist community. Obviously the idea intrigued us so we decided to ask Gabe a few questions about how Mr. Gabriel came about, what it is, and where it's going.

Hi Gabe, how are you today?

I’m doing quite well, thank you.

We have been keeping an eye on the Mr. Gabriel output for a while and have been extremely impressed with the work so far. But can you tell us how you and your bandmate Mark Pontius met and this whole idea came to be?

I appreciate you paying attention! There is a lot of music and general stuff out there so it means a lot. Not too long ago we were both playing Bottlerock in Napa. We hit it off and realised we both lived in Nashville and didn’t like Imagine Dragons, who were playing at the time. Anyways, when we got back together after a couple of weeks off we started creating some crazy stuff. We fell in love with the idea of working with just the drums and bass, and only adding a few things from there. Mark’s dad had made some recordings in the 70’s and 80’s and we were able to find some gems in there to throw around the track to make them seem alive, it was crazy to have those. We started to make something mean, bizarre, driving, you know, just human. I discovered a new side and personality within myself. Our first song was ‘Holy Water’. We put it out last year with a feature we did with Jai Wolf called ‘Starlight’. Things just started rolling from there.

And you yourself have written songs for a number of huge artists in recent years. Is Mr. Gabriel a project just to get out those ideas that you feel only you and Mark could do best?

Yeah honestly it is. I love the people I’ve gotten the amazing opportunity to work with, and I love those songs, but sometimes i just want to write whatever i fucking want about crazy shit. Like ‘Millennial Falcon’ and social media voyeurism, or ‘Help Me Out’ and falling in love with death. Just the stuff that runs through my head.

We understand that Mr. Gabriel is less of a traditional band and more of an artistic community. Can you explain to us a little bit more about that?

That one is still under construction. This whole thing is new for us, and I’m still discovering Mr Gabriel. But we love art as a whole. Mark is one of the most creative people I have ever met and he creates with pure intentions. We leave the commerce at the door. It’s about the song, not whats the hook-iest melody or catchiest part. We’ve brought in visual creators, so many different performers, and we are working on multiple collaborations, (producing, featuring). Some of our creative partners are Megan Thompson and Fairlight Hubbard. They created the concept and executed the vision of the ‘Help Me Out’ video. We let them take the reins and became whatever they needed us to be. It turned out better then imagined. It’s about trust. You can trust a community. We are gonna do more but that’s for another time.

The tracks we’ve heard so far this year, ‘Millenial Falcon’ and ‘Tambourine’, seem to have some interesting themes within the lyrics. What does Mr. Gabriel like to write songs about, or is this a tear up the rulebook kind of situation?

Tear up the rulebook for sure. I read an article about people bitching about how much they hate the internet. It made me hate the internet more, haha. I love writing anti-internet songs although i don’t know if i actually hate the internet, just my lack of self-control. We’ve got a song called ‘Civilized’ that’s about Glamping. The LA idea of camping with WiFi in a premade tent and what not. Anyways, obviously that song must be written because it’s ridiculous. I need satire and humour. There are times I can get away writing songs for other people about this stuff, like about how i don’t understand the popularity of Trap music, but mostly i save them for myself.

As we have already said, we are enjoying your work so far and normally an artist putting out this much material is usually gearing up for a larger release soon. Are you planning something special or will you keep us guessing?

Now… these questions are getting little too intimate.

Keeping us guessing then. And finally, you seem quite happy releasing music at the moment, but what would you say is the end goal for Mr. Gabriel? What is the one thing you hope this project will achieve?

I have to make music. I do it every day, and now it seems like i do it, even when i don’t want to. I want the world to experience what Mr Gabriel has to offer. I’m not going to put any pressure on it. I just feel a desire. I’d like to tour, places i’ve never been and those I’ve been before, remind people that music is not just a computer and a light show, do mad things, or just do nothing. I want to see how wild this beast grows. I’ve planned too many things out in the past.. I’m here now, and it’s good.

Check out all of Mr. Gabriel's output so far on their Soundcloud page here, and check out their latest single 'Tambourine' in the player below.