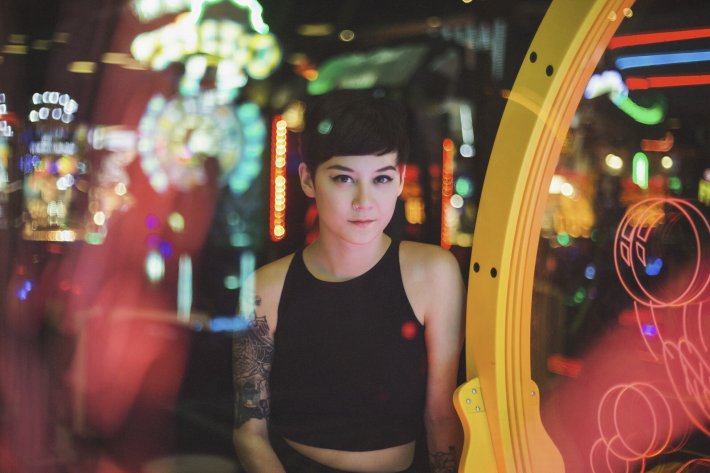 The first I see of Japanese Breakfast’s Michelle Zauner, she’s packing away her gear after sound-checking in east London's Stag’s Head pub. The Hoxton boozer still has plenty of east end charm to it; jobbies with paint-flecked overalls are talking among themselves, sinking a pint or two at the end of the day, act as a reminder of a different time. Zauner’s in the back room, lugging guitar cases and amps to the back before she plays later on in the evening.

Japanese Breakfast’s debut album Psychopomp, released by Dead Oceans, dropped in April. It’s a collection of songs that were written up to six years ago, way before she fronted Little Big League, a Philadelphia-based DIY punk band. This short tour including dates at Rough Trade East and Visions Festival is the first time she’s ever been to Britain and she’s taking the experience in her stride.

‘I had a lot to say about what I was going through at the time, but I also had a lot of old material I felt didn’t get enough attention’, she says. ‘There were songs that I really loved, but I thought could be recorded better and be put out on a format that would make it a compilation record in many ways.’

For a lot of artists, you’d assume making an album is as cathartic a process as you can get. For Zauner, who’s half-Korean on her mother’s side, the album was a beginning. She’s now taking Korean lessons via Skype and learning how to cook, too. In an essay she wrote for Glamour, Zauner explains how she seems to have found a healthy way of understanding the grief she faced after her mother’s passing. At one point, she was paying $50 a week for an hour’s session where she would ‘unload all my shit and then decide I don’t like them’. For her, traditional forms of therapy just weren't working out.

‘I speak a little bit of Korean, actually. I do a Skype lesson with my tutor, Jooyeon, and we meet on there once a week’, she says. ‘It’s funny because I started cooking Korean food, doing my Skype lessons and seeing a therapist in New York all in the same week. I dropped the therapist because I didn’t think it was helpful.’

Later on, Japanese Breakfast are playing in the cramped back room of the pub with a stuffed Stag’s head adorning the wall. At one point, Zauner steps off the stage and dances through the crowd showing those shows playing in Little Big League are translating well to her solo gigs. There’s around 50 people in here, but it feels like she’s speaking to every one of them individually. Unloading her shit one show, one dish and one Skype lesson at a time.

7 hours 17 min ago With his highly-anticipated new album dropping early next year, Miles Kane has now unveiled the n

7 hours 10 min ago Just when you think the indie-rock scene has reached peak saturation, an artist comes along and f