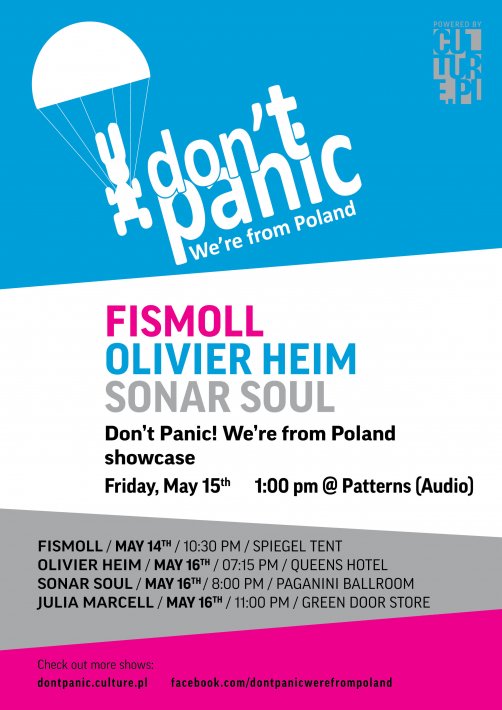 Poland will be the special guest of The Great Escape Festival in Brighton at this year’s upcoming event in May.

Having recently become a musical force to be reckoned with across the globe, Poland is now demonstrating a substantial amount of unique acts encompassing all kinds of genres.

Don't Panic! We're from Poland (DPWFP), will provide delegates and festival goers with an exhilarating snapshot of Polish culture through a series of musical performances designed to enchant and influence. Poland has had a strong presence at The Great Escape since 2008 with a wide variety of exciting artists including Paula & Karol, Novika And The Lovefinders performing to fans and key industry peers alike. As Europe’s leading festival for new music, The Great Escape pride themselves on enabling the most handpicked selection of new artists to perform in front of such varied and influential audiences and this event fits the bill perfectly.

Between the 14th and 16th of May in Brighton there will be four dynamic Polish artists and bands within the standalone showcase Don’t Panic! We’re from Poland. DPWFP is a brand, which was created by the Adam Mickiewicz Institute (AMI) in 2008. Its main aim is to promote Polish music abroad, concentrating on pop, alternative, jazz, electronic, club music, metal, experimental and folk. DPWFP is part of the flagship brand of AMI – Culture.pl.

Here’s a little breakdown of what to expect.

Sonar Soul (Łukasz Stachurko) is a producer/dj based in Warsaw/Poland who's eclectic style might be described as soulful electronic/abstract hip-hop fusion. His passion to modernist architecture and randomness of a human nature leads him to explore naive melodies and sentimental moods by using as limited and unobvious resources as possible. In Sonar Soul Live band, Łukasz is supported by vocalist (Paulina Przybysz) and the drummer (Rafał Dutkiewicz).

Olivier Heim is a Dutch award-winning songwriter and performer, born in the USA, raised in Luxembourg and currently living in Warsaw, Poland. Incorporating a cascade of chorus fused guitars and slap delays, Olivier’s smooth vocals are combined with groovy bass lines and spacey synthesizers, resulting in modern songs that feel like a cool dive into the surf and soul sounds of the 70s.

FISMOLL is hailed as the most amazing young singer/songwriter who debuted in Poland in 2013. Despite his young age (20 years old), his prowess as a composer, arranger, singer and guitarist is exceptional. Fans and journalists without hesitation place his name among such artists as Bon Iver, Sigur Ros, Ben Howard, or even Olafur Arnalds. Fismoll’s much anticipated debut album “At Glade” is signed by a remarkable new independent Polish label NEXTPOP. The music video to his first single “Let’s play birds” has now more than 1,8 million views on YouTube.

Julia Marcell is a singer songwriter from Poland, currently living in Berlin.

In 2007, she released a 5 track EP, called Storm, followed by a fan funded debut album through SellaBand in 2008, called "It Might Like You". The album was then released in Germany, Austria, Switzerland in 2009 and then later that year in Poland. In 2011 followed "June" - Julia's second album, one that brought a significant change in sound, and saw the artist experimenting with rhythm. This year Julia is preparing the release of her third musical statement - “Sentiments” coming out soon.

1 day 22 hours ago With her long-awaited new album landing next week, Rae Morris has now unveiled the final cut to b

1 day 22 hours ago After receiving a flurry pf praise and attention from the likes of The Line Of Best Fit, Euphoria