Getting To Know... Express Office Portico

Getting To Know... Express Office Portico

Their debut single 'I Like It Weird' is out now 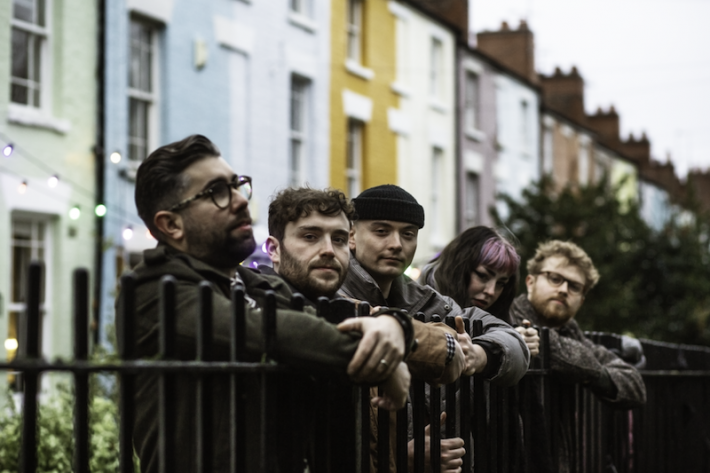 With a sound that looks to take influence from current synth-pop bands, shoegaze, and early noughties indie, Nottingham's Express Office Portico are making a grand impression with their debut single 'I Like It Weird'.

Focusing on singer and synth player Billy’s struggles with the mental health condition OCD and how it affects his love life, 'I Like It Weird' makes for a fresh and vibrant introduction to their sound. Filled with a rich and glittering atmosphere, killer rhythms, and catchy hooks left, right and centre, their initial offering spells huge promise for them in the months ahead.

So with the new single available now, we sat down with Billy and Tara from the group to find out more about their influences and what has inspired them over the years.

Billy: Piano was and is my first instrument, but when I was told I had good rhythm as a young teenager I became infatuated with the drums. Not that I was any good at them!

Tara: Piano was also my first instrument that I properly treated as an instrument before my voice, however until I found piano I attempted guitar, violin and recorder as a young teen. All that amounted to is being able to play a few chords on an acoustic guitar though, oh and three blind mice of course.

Billy: Growing up I was surrounded by all sorts; prog rock, metal, musical soundtracks to name a few. I like to think I settled for a happy medium in post-rock bands such as Sigur Rós. I was also into a lot of indie bands, Radiohead, Hot Chip, Friendly Fires, the list goes on.

Tara: As a teenager I was a major wannabe scene kid with varying influences from Nirvana, The Who and Black Sabbath to Slipknot, My Bloody Valentine and Blink-182. Most of my influences fall under a rock derived genre, although I’ve explored many many others!

Billy: God Only Knows by The Beach Boys. No Question!

Billy: We tend to start with a basic chord structure on piano which normally allows ideas for vocal melodies to form and fit around that. Once we have the initial structure of the song down we then look to give it more texture by converting it to synths, adding all the other instruments and then iterating through many a version until we have something.

Tara: It feels like seeing as most of our time as a band has been in lockdowns we’ve somewhat been forced into that habit when writing. We’ve come up with a few ideas by thrashing things out in what little time we’ve had in the practice room too, which we would like to do more of. Lyrically its a different matter; myself or Billy tend to go away and create them ourselves, with the other then potentially adding to them here and there. When it comes to actually writing them, sometimes its an incredibly quick process but then other times I find myself taking inspiration from the endless notes of lyric ideas on my phone.

Billy: I’ll second that. The amount of notes I have on my phone is obscene. Normally have to skip through the shopping lists though.

Billy: After the recent death of SOPHIE I’ve been digging around her amazing catalogue again and all the associated artists; A.G Cook, Caroline Polachek, Hannah Diamond. The Flaming Lips and Alex Cameron are another two that have been floating in and out of my listening habits. They are both most certainly in at the moment!

Tara: I’ve found myself listening to a mixed bag of artists stylistically recently, mostly female. GIRLI, Raveena amongst others. I’ve also been diving deeper into the discography of Pale Waves (probably mostly because of my massive crush on Heather Baron-Gracie).

Tara: When I write songs I usually float between talking about myself and another person, whether that’s someone I know in real life or directly addressing the listener. So most of my songs mention another person in my life that feels relevant to the song I’m writing.

Billy: I tend to do the same. I only really feel comfortable writing about myself and my experiences, whether that be involving other people or not isn’t normally the influence for many of the songs I write. Having said that, I’ve written in the past about a frustrating friend. That song in fact kickstarted this whole band. Turns out it was good fuel for the fire!

Billy: Certainly the most unusual was the 5 of us all contracting COVID after only two practices with our guitarist Rueben. Amazingly after that glowing first impression he stuck with us!

Tara: I have to agree with that one!

Billy: Thanks for sticking around after that too Tara!

Billy: My instant thought is Radiohead, but I can’t begin to imagine how daunting that would be!

Tara: I’d have to agree and say Radiohead honestly. Although maybe anyone at the moment, when can we start gigging please?

Tara: Well If I wasn’t a musician in some way or another I’d want to be doing something creative or helpful to the community. I can see myself doing something like music therapy.

Billy: I’m actually a data analyst by day, so I guess I’d say that!

Tara: Don’t try and write to appease an audience. Most of the time when you create something that you think other people want, it doesn’t turn out to be what they want at all. After all, most people don’t know what they really want and actually engage more when met with something they weren’t expecting!

Billy: Oh completely! I never know what I really want, all I know is I want to have fun and make music I enjoy writing.

Express Office Portico's debut single 'I Like It Weird' is available to stream and download now. Have a listen to it in the player below.

1 day 37 min ago With his highly-anticipated new album set to land near the end of this month, Dayglow has now unv

1 day 30 min ago Having already made his mark as the resident producer of London-based Nine8 Collective, as well a