His new EP 'Typhoon' is out now 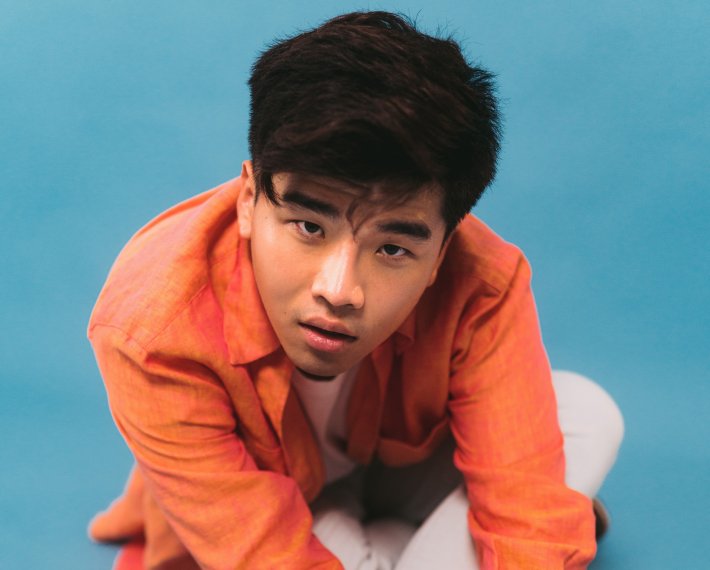 Following on from a broad and exciting array of offerings these last few years, Australian-Chinese artist JËVA has now returned to deliver his eagerly-awaited sophomore EP 'Typhoon'.

Channelling the same sweet and pulsing alt-pop direction he is known for, 'Typhoon' showcases exactly why so many have been switching onto him of late. With its rich and sweeping textures, broad atmosphere, and his glittering voice layered throughout, this new collection is a magical listen from start to finish.

So with the new EP out now, we sat down with him to find out more about his background and what has inspired him most over the years.

Does the voice count? Since I was a kid I’ve loved just making weird sounds and yapping on (still do). Pretty much just experimenting with whatever weird sounds can come out of my mouth. Often amongst friends I’ll still have the impulse to randomly yell and make gibberish noises out of nowhere and everyone just doesn’t bat an eyelash now. Obviously singing is cool too.

My first exposure to music of my own discovery was buying an alarm clock radio as a kid when Rihanna- Umbrella was dominating the charts.. I loved that era so much… pop Rnb, pop rock & the emergency of country lass Taylor swift. That time in music (Limewire days) has a very special place in my heart. There were heaps of cool underground bands and unreleased tracks that aren’t even on Spotify that I rinsed on repeat - what a time.

It was this compilation album of what was charting called “So Fresh: The Hits of Spring 2007”. I found it the other day and I play it in my car sometimes for a nostalgic drive. Big Girls Don’t Cry will never die.

Supercuts by Lorde. Said this to myself the first time I heard it and I don’t think this answer will ever change. It’s like the peak of my personal musical ambition. I can’t even explain it. It’s just so perfect.

Recently I’ve been doing a lot of co-writing and I love to go into sessions with one specific reference track that we want to recreate the feeling of. It’s always a vibe and so far every song has turned out amazing.

I’m obsessed with this Canadian band, Valley. I feel like they’re still pretty unknown amongst my Australian peers (but they’re obviously growing rapidly in their scene). They’re really cool. It’s like pop, but indie - somehow fresh but also feels like home.

I know this answer is ever-changing but as of current - I’d say Rina Sawayama.

Definitely the feeling after writing a great song (usually after a session) and/or performing that original live and telling the story behind it - connecting to the audience. Both are honestly one of the most fulfilling things in the world, it’s all the stuff in the middle that can get sluggish and icky - especially when you start basing your self worth off the metrics, “success” and growth of a project when it really shouldn’t matter. I mean obviously it matters in the capitalistic financial sense of trying to turn a passion into an income stream, but on the soul level of why any musician does what they do... it really shouldn’t matter, and that’s something that's often hard to remember.

Hahaha I think I just answered this question above.

Not even as a musician specifically, but my sister who’s 12 years older than me and went the corporate route (polar opposite to me) tells me - keep doing this if it makes you happy. The day you don’t feel happy from this path anymore, just go do something else. This mindset is so comforting. The pursuit of being an emerging artist and songwriter brings me so much joy right now - but one day that might change and that’s okay. Hopefully I’ll keep going and get to where I want to be, but life is fluid and we only have one chance on this mudball. Why are we putting so much pressure on ourselves when so many things are out of our control? I think this innate pressure to “make it” also can take a lot of the joy out of the journey.

JËVA's new EP 'Typhoon' is available to stream now. Check it out in the player below.

10 hours 29 min ago With his highly-anticipated new album now less than a month away, Will Joseph Cook has now delive

6 days 10 hours ago After breaking through with her incredible cut 'miss u' last month, which found support on Wonder