Getting To Know... The Parasocials

Getting To Know... The Parasocials

Their new single 'Deadzone' is out now 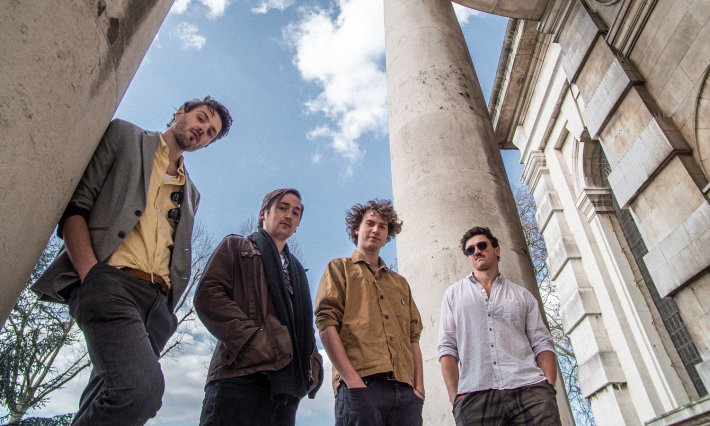 After spending the last year building and spreading their distinctive sound out to the world, London-based outfit The Parasocials return to their vibrant ways with the pulsing new single 'Deadzone'.

Described as Yard Act meets Talking Heads, 'Deadzone' makes for a brilliant engaging listen. With its smooth yet pounding rhythm, soaring aesthetics, and catchy hooks layered throughout, it already feels like we are going to be hearing a lot more from these guys in the months to come.

Tomer: I'd have to say it was the bass guitar. Sleek, refined, with the ability to define and re-contextualise the harmony, can't say fairer than that.

George: I got trained to play the duduk by the Mekhitarist monks while hitchhiking through the Armenian mountains.

George: I'd have to say, predominantly Mongolian throat singing.

Tomer: I didn't get into music until my early teens, Queen were the gateway drug that soon had me hooked on Bowie and the Beatles.

Tomer: I'm ashamed to say it was the soundtrack to 'Wild Wild West. I later learned the title track was a brazen sample of Stevie Wonders 'I Wish'.

George: I have never 'owned' an album. I have, however, 'acquired' a fair few. One of the first to enter my collection was The Magic Bridge by Richard Dawson, which spurred a lifelong enthusiasm for his work.

Felix: Murder on the Dancefloor, by Sophie Ellis-Bextor.

Felix: Murder on the Dancefloor, by Sophie Ellis-Bextor.

Tomer: There are quite a few songs I've gone to write, only to find Dylan has gotten there first, What Was It You Wanted, off 1989s Oh Mercy, is one of those.

George: I would have liked to have written 'Poor Horse', by Richard Dawson.

Tomer: If you consider the inhalation of the vapours of a particularly popular brand of nail varnish a ritual, then sure.

Felix: I merely don my hair shirt, complete a 72 hour fast, accompanied by intense prayer and confessional, all while listening to Morrissey.

George: I just wing it.

Felix: I prefer the sonorous tones of Black Country, New Road, washed down with the easy-listening folk musings of Phoebe Bridgers.

Tomer: I'm finding myself sticking Lovesong by Common Saints on repeat at the moment, I'm also really enjoying Yard Act, who am I told we share some tonal similarities to.

Tomer: I would absolutely love to open for Car Seat Headrest. Will, if you're reading this, give our manager a call and let's make it happen!

George: Car Seat would actually be pretty cool, I like that one song about the whale.

Tomer: I'd have to say...the free drinks tokens.

Felix: Especially when the free drink in question isn't just a can of red stripe.

George: I'm all about the fame and fortune lads.

Felix: The constant and unrelenting demands of our groupies.

Tomer: Dealing with the to's and fro's of swaying music industry opinion. I have worked with many record label execs who's opinions and game plan swing on a dime, and are worth about as much l.

George: The complete absence of any fame or fortune.

Tomer: Play on the one and don't fake the funk.

Felix: If you're going on tour, don't share a bunk.

George: Never steal a duduk from an Armenian monk.

The Parasocials' new single 'Deadzone' is available to stream now. Check it out in the player below.

4 hours 12 min ago After delighting us with a flurry of warm and enticing releases these last few months, James Vick

4 hours 29 min ago After establishing himself with a flurry of releases throughout last year, fast-rising artist Tot